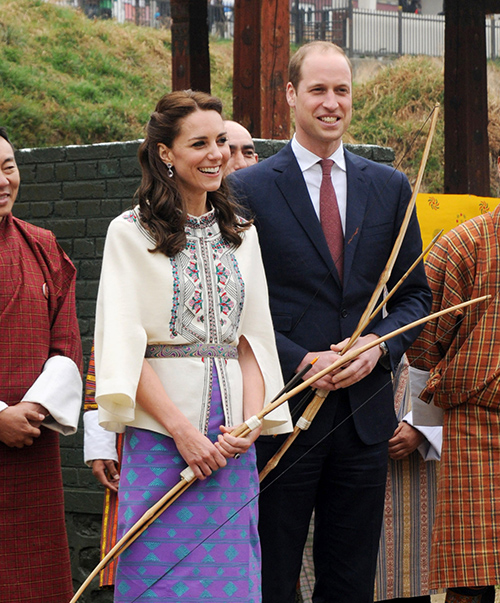 Kate Middleton craves Angelina Jolie’s Hollywood lifestyle! The Duchess of Cambridge is reportedly planning all kinds of playdates for Prince George with Angelina’s children. It all started over tea at Kensington Palace in June of 2015. William and Kate got along famously after sharing some finger sandwiches and a proper cuppa. After the tea party, Kate and Angelina talked on the phone for hours and sent lots and lots of emails, a source recently revealed to OK! magazine.

Brad Pitt and Angelina Jolie are now based out of England, as Brad is filming the World War II drama ‘Allied.’ This allegedly has Kate all excited because, the insider divulged, “[Kate] is a huge fan and admires [Angelina] greatly.”

The Duchess of Cambridge has already extended an invitation to Angelina and the children to drop by Anmer Hall for a play date with Prince George and Princess Charlotte. Kate must be desperate to grasp onto even a sliver of the superficial Hollywood lifestyle. Aren’t Angelina’s children a little old for play dates? Twins Knox and Vivienne, at nearly eight years old, aren’t suitable playmates for an almost three-year-old and a one-year-old.

If play dates don’t cut it, then Kate would “love to take [Angelina] to a pub or the ballet” a Royal insider revealed. Kate’s even pushing Prince William and Prince Harry to spend some time with Brad Pitt at a football match. “It’s just a matter of sorting out dates!” this source said.

It’s believable that Kate wants to collect as many Hollywood stars as friends as she can, but Kate and Angelina out at a pub enjoying a pint, seriously? If that were true, you know that anywhere Kate goes her commoner mother Carole Middleton and sister Pippa Middleton won’t be far behind.

Hanging out enjoying a football match with Brad wouldn’t be such a bad thing. Harry and the Oscar winner would probably get along famously – they both appreciate a pretty blonde. Prince William would probably be a bit of a stick in the mud.

Where did Kate Middleton find all those hours to chat on the phone with Angelina Jolie? Kate doesn’t exactly have a full schedule. She’ll show up for three events in one day and then disappear for weeks. Maybe that’s when Kate finds all that time to write emails to Angelina.