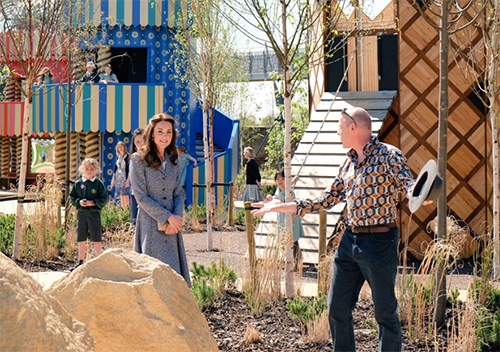 Kate Middleton attended the opening of the children’s play area Magic Garden but Prince George did not accompany the Duchess of Cambridge. Does Kate think George is too good to play with commoner children? Kensington Palace posted quite a few photos on Twitter and Instagram of Kate happily meeting with children who turned out with their parents or guardians to enjoy the new playground at Hampton Court Place.

You would think the Royal mum of two would bring an almost three-year-old Prince George along to play with the children. No sign of George anywhere at all.

One commoner mother, who was at the playground, told HELLO! that Kate said George would have loved the play area but he would have been scared of the model of the 25-foot long sleeping dragon. Then why didn’t Kate bring him along?

Where was Prince George? Speculation is that he was off at nursery school on Wednesday when Kate made her visit to the Hampton Court Place Magic Garden play area. Why couldn’t George take a day off to go with mom to unveil the plaque and play build some sandcastles and peek inside the hidden dragon nest? Royal watchers believe Kate doesn’t want Prince George associating with commoner children.

That is an odd assumption though. Prince George attends nursery school with commoner children. Are there different levels when it comes to which non-aristocratic and non-royal children are acceptable playmates?

Another reason Kate Middleton may have Prince George at home is because she’s was running all over the place on Wednesday. Kate headed to a luncheon for Anna Freud Centre, for which she serves as a patron. Kate could have dragged along a nanny to take George home after the playground opening.

From the playground, the Duchess of Cambridge headed to the National Portrait Gallery to check out the ‘A Century of Style’ exhibit, which showcases a range of photographs commissioned by British Vogue since 1916.

A very exhausting day for Kate Middleton, don’t you think? Did she leave Prince George at home because it was a nursery school day? Would George have made an exhausting day even more so? Or did Kate want to keep the third-in-line to the throne away from children of commoners?