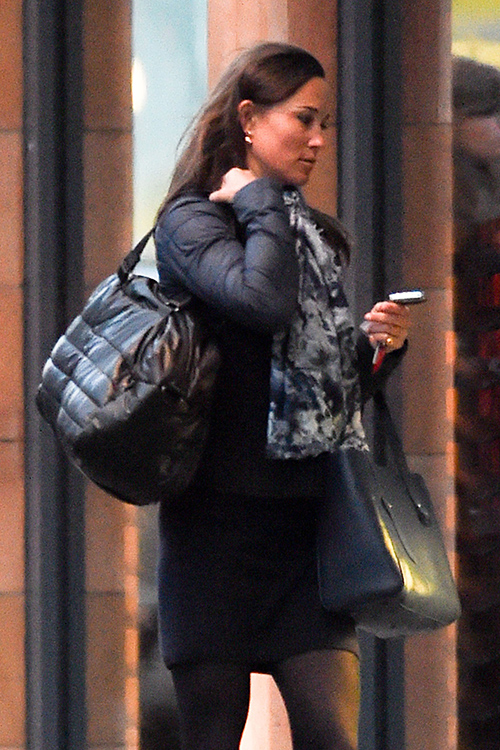 Has Kate Middleton demanded Pippa Middleton marry boyfriend James Matthews, settle down, have a few children, and take on some charity work? At this point, Prince William must agree that Pippa has zero career prospects.

Big announcement, in case you missed it, Pippa Middleton moved into James Matthews’ $25 million mansion which is has currently undergoing some renovations. These additions reportedly include adding his and her dressing rooms off the master bedroom.

The Duchess of Cambridge has tried to help Pippa launch a career, any career at all. Pippa’s stint as an author was a huge flop. Then a try at being a television reporter, which didn’t work out at all. Kate and Pippa were supposedly working on developing a line of organic baby food or an upscale clothing line for children. We haven’t heard much about that in months.

What we have seen recently is Pippa jetting all over the world on expensive vacations with James Matthews and participating in charity marathons and ski events. Has Pippa finally found her true calling? Wealthy society wife, mother, patron of several charities?

Carole Middleton can’t have two Royal son-in-laws, right? Though, goodness knows, both Kate Middleton and Carole have tried to push Pippa onto Prince Harry. The two may have enjoyed a brief fling. We don’t know for certain but there was plenty of buzz that Harry was sneaking Pippa into the palace. But, apparently, Pippa is not Royal bride material.

When it comes to status James Matthews obviously doesn’t have Prince William’s Royal pedigree. However, he is wealthy which, in Carole Middleton’s book, is good enough for Pippa Middleton. James will be able to provide a rather glamourous lifestyle for Pippa. Not as glamourous as Kate Middleton’s but close enough.

It does seem Pippa will make an excellent society wife. Kate Middleton, Prince William, and Carole Middleton are probably all waiting on the engagement announcement. All will probably take a deep sigh of relief when Pippa Middleton is settled into married life and no longer making a fool of herself at this career or that.