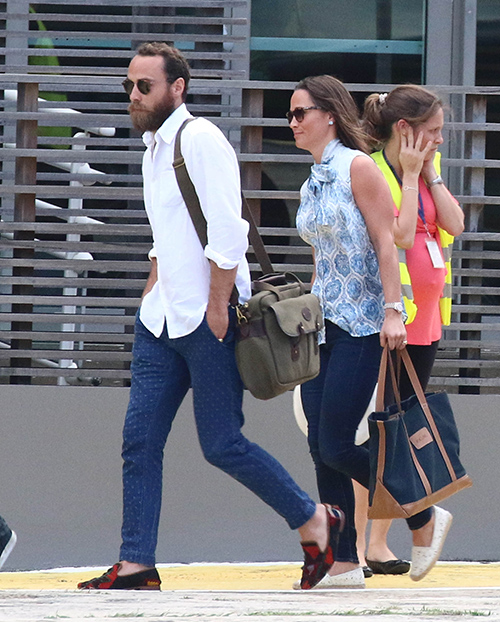 Pippa Middleton is, once again, begging for worldwide attention. Kate Middleton’s younger sister ran a 7K to raise funds for the Mary Hare School recently. But did Pippa just use it as an excuse for a photo op?

The Mary Hare School for the Deaf, for which Pippa became an ambassador in 2013, was the beneficiary of funds raised by what has been called a fun run around Donnington castle in Newbury.

Looking at the photos splashed all over the Internet, it appears that Pippa wasn’t at the run simply for good cause. No, it looks as if Pippa used the Mary Hare School for the Deaf event as a way to get her name back into the news cycles.

How do you run a 7K with a big grin on your face? How are you able to finish the race without sweating even a little bit? Why think this jog around Donnington castle was meant as a photo op for Pippa Middleton? Pippa made certain the cameras where there to take a few pictures of her and a group of other runners – and the Easter bunny.

Then there are pics of Pippa jogging while waving and smiling. Staged much? Is Pippa back to competing with Kate Middleton for media coverage?

There hasn’t been much news to share about Pippa since her New Year’s trip to St. Barts with James Middleton and on-again-off-again-on-again boyfriend James Matthews. Now, all of the sudden, Pippa is back in the news.

Just a few days ago Pippa was part of a cross-country ski race in Norway. Before that Pippa Middleton was in Switzerland on a ski holiday with James Matthews. What happened to the Duchess of Cambridge’s sister for nearly two-and-a-half months? Perhaps Pippa and James needed a little intimate couple time. Maybe Carole Middleton was plotting how to get her younger daughter’s name and image back out there?

Is it coincidence that Pippa has made a comeback just as the Duchess of Cambridge has been caught up in pseudo-scandal involving a private family ski trip and a pair of expensive fur lined leather mittens?

Maybe Pippa is jealous that Kate Middleton is getting so much attention over her first solo interview since marrying Prince William. The entire world is in a tizzy waiting to hear all Kate has to say during the Our Queen at Ninety documentary.

Poor Kate has been left behind by Prince William as he treks to Kenya to promote his wildlife preservation initiative – and attend ex-lover Jecca Craig’s wedding. Adding to Kate’s woes? Little sister Pippa attempting to steal the spotlight once again. Shame on Pippa for using a charity run as a means of getting back into the news.