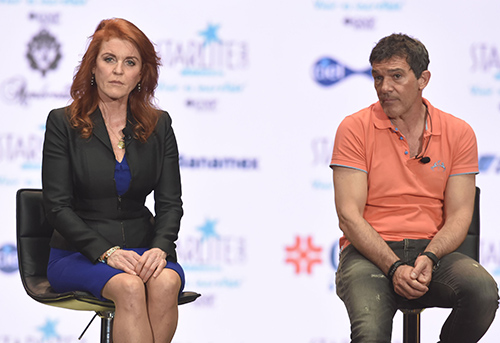 Kate Middleton has reason to be disgusted with Sarah Ferguson once again. Sarah was photographed flirting with Antonio Banderas just hours after it was reported Sarah and long-time boyfriend Manuel Fernandez had called it quits.

Life has a funny way of turning around quite quickly. Sarah may have been devastated by the breakup with Manuel, but it certainly didn’t show! The paparazzi snapped photos of Sarah shamelessly flirting with Antonio at a press event in Mexico City. Sarah seemed very bubbly and happy; she did not appear devastated, weepy, and inconsolable.

Manuel, who is half-Irish and half-Spanish, is a handsome and wealthy Internet entrepreneur nine years Sarah’s junior. Has the Duchess of York found herself a wealthy and handsome full-blooded Spaniard to fill Manuel Fernandez’s shoes?

If the photos splashed across the Internet are any indication, Sarah acted like a schoolgirl with a crush around Antonio Banderas at the press event. The two were touching, hugging, and smiling, and it’s quite obvious Sarah Ferguson was flirting with the actor.

As if the Duchess of York and her daughters Princess Beatrice and Princess Eugenie haven’t given Kate Middleton enough reason to be embarrassed with their constant vacationing and excessive spending. Now Sarah is throwing herself at Antonio Banderas? The shame!

No one is exactly sure what caused Sarah’s breakup with Manuel Fernandez. All that’s been reported is that the couple spent two happy years together and that Manuel was a frequent guest at Sarah’s ski chalet in Switzerland. Then, one day, Manuel wasn’t around anymore. Poof! He just disappeared. Allegedly, Manuel just wasn’t as into Sarah as she was into him.

A heartbroken Sarah seems to have rebounded nicely despite reports that she was devastated when the relationship with Manuel ended. The smiling redhead and Antonio were quite cozy at the press event before the Starlite charity gala, where Sarah was honored for her philanthropic work.

Antonio was reportedly dating Dutch investment banker Nicole Kempel a couple of years ago. It’s clear Antonio is ready for a new relationship. Could Sarah Ferguson be the one? Maybe Kate Middleton is hoping Sarah Ferguson and Antonio Banderas will ride off into the sunset never to be heard from or seen again.