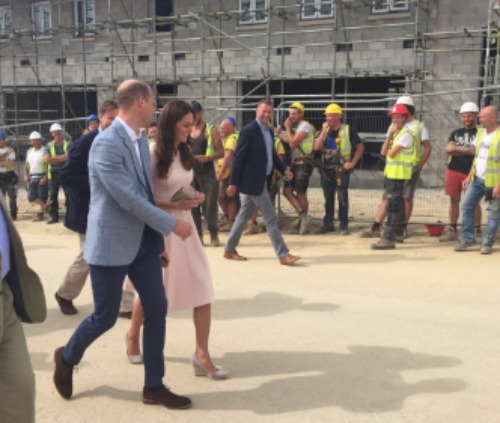 Kate Middleton has been disrespected once again in public and her husband Prince William didn’t do anything about it. In fact, the Duchess of Cambridge was catcalled by construction workers in Cornwall with the Duke of Cambridge right next to her in what can be best described as an awkward situation.

Kate Middleton and Prince William’s royal engagements are making headlines again as they are finally back to work after a summer long holiday break. Often called the laziest royal couple in the British monarchy’s history, Kate Middleton and Prince William made a special effort to visit the Truro Cathedral to support appeal for a new roof and also met with students from the Wave Project, which is designed to kids how to surf to help reduce anxiety.

While visiting the Cathedral grounds, several construction workers catcalled Kate Middleton as she strolled passed them in a short, sexy pink dress with Prince William beside her. While any other husband would find it disrespectful for another man to whistle at his wife in public, Prince William did nothing. In fact, both Kate Middleton and Prince William laughed at the awkward situation while some builders even tried snapping a selfie with the Duchess during their visit.

Clearly, Prince William didn’t want to make a mountain out of a molehill, but the least he could have done was put a protective arm around his wife or better yet, simply hold her hand during their visit. Prince William and Kate Middleton walked a few feet apart from them, with their body language as stiff as ever.

Sure, Prince William knows that as the future King of England his every move will be documented and scrutinized by the media and the public, but as Kate Middleton’s husband, he could have shown her the affection she deserves, especially if other men are ogling her for wearing such a sexy dress.

Everyone remembers the time when Prince William and Kate Middleton were forced to awkwardly make conversation with each other in front of the Ayers Rock during their trip to Australia in 2014, in what many recall as the most painstakingly uncomfortable photo session ever taken by the royal couple. Two years later, and almost nothing has changed.

Tell us CDL readers, do you think Prince William should have reacted to Kate Middleton being catcalled? Come back to CDL for all your Royal news and reports!

Duke and Duchess of Cambridge spotted on Towan Beach In Newquay, Cornwall, England, September 1, 2016 by FameFlynet

Looking forward to visiting the Isles of Scilly tomorrow… pic.twitter.com/53snUh8kZT

The development projects provide thousands of new homes and jobs for the local community. pic.twitter.com/3zI0yTKlbk