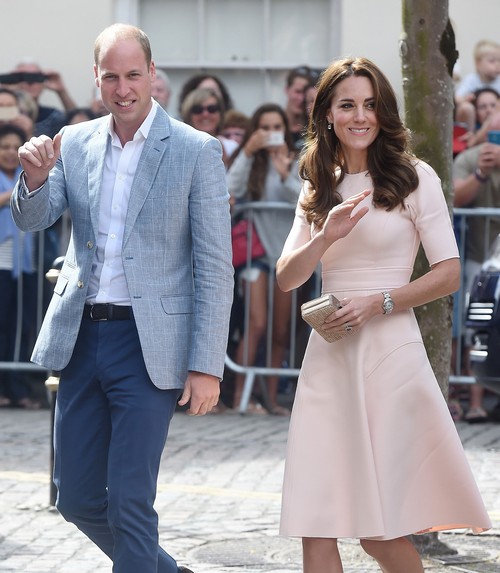 Kate Middleton and Prince William have begun their trip to Cornwall as part of their trip to scope out their future £20 million annual inheritance – there are rumors that Kate and Will might use the opportunity to get pregnant with a third child in a haunted house. The royal couple’s trip includes a visit to a historic cathedral, catching a wave with surfers and even a paranormal encounter!

Like any good future owner, he and Duchess Kate are scoping out everything the Duchy has to offer, including the historic town of Truro.

Truro, the only city in Cornwall, is playing host to Prince William and Kate Middleton during their trip to Cornwall. While in Truro, the royal couple is set to visit the Truro Cathedral, built between 1885 and 1910, where they will sign roof tiles as part of the “Sign-a-Slate” roof appeal.

After visiting the cathedral, Prince William and Kate Middleton will spend time on Newquay Beach. While there they will meet with members of the Wave Project, a charitable organization that uses surfing as a vehicle to reduce anxiety in children. The couple has been very active lately in promoting mental health, a cause that is close to the hearts of both Prince William and Kate.

Also while in Cornwall, Prince William and Kate are channeling their inner ghostbusters by spending the night in a spooky 500-year-old mansion that is rumored to be haunted by the ghosts of 1,000 soldiers that perished during the English Civil War. Owned by the Duchy, Restormel Manor in Lostwithiel, Cornwall, was once owned by Edmund, Earl of Cornwall, and the Black Prince, Edward Duke of Cornwall.

Prince William and Kate Middleton’s trip to Cornwall could be seen as a romantic getaway of sorts. Having left Prince George and Princess Charlotte at home, the two may have the opportunity to get down to some royal business of the most important order – working on baby #3, perhaps? Could Kate Middleton possibly agree to get pregnant again after she worked so hard to get Hollywood skinny after giving birth to mandatory spare, Princess Charlotte?

What do you think of the royal couple’s trip to Cornwall? Which is more likely: the Prince William and Duchess Kate Middleton riding a killer wave or engaging in ectoplasmic battle with ghosts? Is this a romantic getaway for the couple so that they can work on becoming pregnant with their third child? Tell us your thoughts and predictions below! Come back to CDL for all your Royals news and reports!

The Duke and Duchess of Cambridge will begin their visit to Cornwall in Truro, Cornwall’s only city, where they will visit Truro Cathedral to meet civic dignitaries and cathedral representatives on September 1, 2016. While there, Their Royal Highnesses will also ‘Sign-a-Slate’ in support of the Truro Cathedral roof appeal. FameFlynet