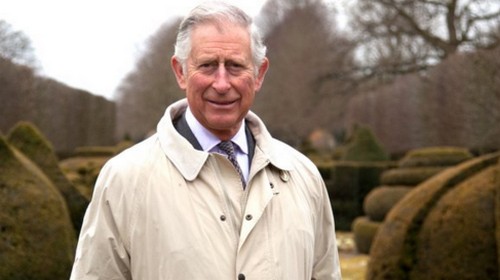 Kate Middleton has encouraged Prince Charles to make the Royal Gardens more child-friendly. Prince Charles is happily doing so, all the while enjoying time with Prince George. Camilla Parker-Bowles must be ridiculously jealous over what she perceives as Charles pandering to spoiled commoner Kate Middleton.

William and Kate do not allow Camilla Parker-Bowles around the Royal grandchildren unless absolutely necessary. That means the more time Charles spends with George and Charlotte, the less time Charles spends with Camilla which makes her outrageously jealous. George and Charlotte are a constant reminder of Princess Diana. The little ones are Diana’s grandchildren, not Camilla’s.

Prince Charles shared with BBC Radio 4’s Gardeners’ Question Time that he has already begun teaching Prince George how to garden. The future King revealed that he has planted a tree or two with George at the Highgrove Estate. “We planted it together. We shoveled in the earth,” the proud grandpa explained.

As the years pass Charles looks forward to watching the trees grow with George. “Each time [George and Charlotte] come you say, ‘Do you see how much the tree’s grown.’”

The hope is that Prince George will find an interest in nature and in gardening just like grandpapa Prince Charles. The Prince of Wales love of planting and tending gardens came from spending time with the Queen Mother at Royal Lodge in Windsor Great Park.

Many of Prince Charles fondest memories are tending a small garden at Buckingham Palace. It is those memories that has helped Charles design the gardens at Highgrove and at Dumfries House in such a way that they are interesting to a child. Now Prince Charles is creating special memories with Kate Middleton and Prince William’s children.

“We’ve made a maze now up there which is rather fun and I adored a maze when I was young,” Prince Charles revealed. It is wonderful that Charles has taken two-and-a-half-year old George out into his beloved gardens at Highgrove and Dumfries House.

Highgrove has always been Camilla Parker-Bowles’ domain. Charles and Camilla would often hide out at Highgrove to conduct their tawdry affair while Prince Charles was married to Princess Diana. Having Kate Middleton and Prince William’s children take over the place probably isn’t what Camilla had in mind during her golden years.

No, Camilla Parker-Bowles imagined she would be Queen Camilla and controlling Buckingham Palace by now. Come to CDL for all your Royal news, views and gossip!

Prince George has already had a hand in one of the grandest gardens in the country… @HighgroveGarden @BBCGQThttps://t.co/PKdPuHlk5R