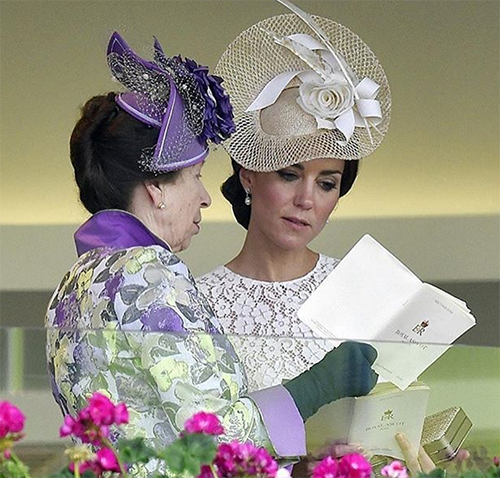 Kate Middleton and Princess Anne enjoyed a chat during the second day of the Royal Ascot Races. Does Princess Anne enjoy the company of the Duchess of Cambridge, leaving Camilla Parker-Bowles twisting in the wind, frozen out of the Royal friendship? Is this yet another rivalry between Kate and Camilla – a tug-of-war to gain favor in the eyes of Queen Elizabeth’s only daughter?

Camilla has been married to Anne’s older brother Prince Charles for over a decade and yet we rarely see any photos of the Anne and Camilla chatting or spending any time together whatsoever. You would think Anne, as a divorcee who remarried, would have empathy for Camilla’s situation. It certainly doesn’t appear that way.

The Duchess of Cambridge has been playing nice with everyone in the Royal Family lately. During the mass of thanksgiving at St. Paul’s Cathedral, Kate sat next to Sophie Wessex’s daughter, Lady Louise. There’s been a bit of a rivalry between Sophie and Kate in the past, which made it surprising that Kate would sit next to Louise, but she did.

Then Kate shared a carriage with Camilla to the Trooping of the Colours even though Kate didn’t look all that thrilled about the situation. But, Kate smiled and listened as Camilla prattled on. Kate then stood next to Camilla Parker-Bowles on the balcony of Buckingham Palace for the family photo op.

Now we see photos on social media of Princess Anne and Kate Middleton with their heads together at day two of the Royal Ascot Races. The Royal ladies appear to be reading a program about the day’s events.

Not only were Kate Middleton and Princess Anne enjoying a friendly moment, Kate also took time to renew her friendship with Princess Mary of Denmark. The future Queens hadn’t seen each other since meeting at a UNICEF engagement in November 2011. Apparently, the ladies had a lot to catch up on because they were spotted having quite a good time together.

Let’s face it, the Royal Family tolerates Camilla Parker-Bowles only because they must. With any luck, Camilla will never be Queen. Either Queen Elizabeth will outlive Prince Charles and Prince William will be the next King or Prince Charles will just get too old and give up by the time the crown gets to him.

Perhaps Princess Anne, who has been called the hardest working Royal, has taken Kate under her wing to explain the importance of a calendar full of Royal engagements.