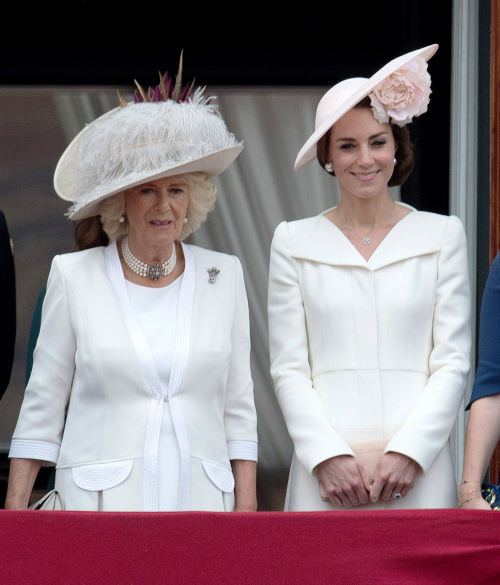 Kate Middleton is clearly a style icon while Camilla Parker-Bowles seems to suffer one fashion catastrophe after another. Although the Duchess of Cornwall has come a long way since Prince Charles first trotted her out as his prospective wife after his Princess Diana divorce, she’s still a hot style mess.

What’s particularly disturbing about Camilla’s sense of style (or lack of sense) is her love of overlarge hats with excessive plumage. As a woman that loves to hunt, perhaps she likes to feel like it looks like something she’s killed herself.

Her haberdashery habits are nothing short of horrid!

Does Camilla Parker-Bowles need to fire her stylist? Does she even have a stylist? Reportedly, Camilla has a “couturier” that designs many of her country suits – Roy Allen is his name.

The fact is, Camilla Parker-Bowles is more “Horse & Hound” than Vogue.

When she was Charles’ secret lover that was fine, but as the Duchess of Cornwall for a decade, her style SNAFUs are intolerable. By comparison, Kate Middleton rarely has a fashion faux pas – perhaps Camilla needs to hire Kate’s stylist.

What’s interesting is that Kate Middleton’s stylist is not a stylist at all. Natasha Archer was Kate’s personal assistant and has evolved into her stylist but reportedly the final choice of outfits always comes down to Kate herself.

Clearly, the Duchess of Cambridge has an eye for fashion that Camilla lacks.

Perhaps Camilla needs to consult her step-daughter-in-law on her fashion choices, but that may be too humiliating to consider. Clearly Prince Charles can take the woman out of the country, but not the country out of the woman.

Prince William may have chosen a commoner, but at least he snagged one with a sense of style. The fashion disparity was on full display when Camilla and Kate shared a carriage at the Trooping of the Colours for Queen Elizabeth’s birthday.

Camilla has on white gloves which are passé for all but the elderly, a frumpy suit, and a hat that looked like a chunky wedding cake with a full bird’s worth of feathers stuck to it.

To make it worse, Camilla went with a three tier pearl choker that calls attention to her neck folds. Kate Middleton was a study in fashion contrast with her pale suit with a stylish neckline and simple necklace.

Kate’s ensemble allowed her shell pink hat with a single large flower to be the stand-out element. Camilla’s Trooping the Colours ensemble looked like too many accessories all fighting for attention.

Also, at the recent St Paul’s Cathedral event as part of the Queen’s birthday – the two were again in similar colors – both went with pale blue – but it was, as always, a study in “what to do” versus “what not to do.”

Camilla Parker-Bowles opted for a too-busy hat, a dress with no waistline and heavy pearls with a competing broach. She’s always got too much going on. Kate Middleton killed it with her applique dress, simple jewelry and streamlined hat.

Perhaps Kate’s stylist/assistant Natasha Archer could give Camilla a few pointers. CHANEL’s style guide offers this advice that could serve Camilla Parker-Bowles well: “always take off one accessory before you leave the house.”

Since a hat seems to be required wear for Royal events, the Duchess of Cornwall should sacrifice a piece of her overlarge jewelry she seems to favor. Better yet, take some pruning shears to her monstrously overdone hats.

Kate Middleton always has it right. She makes herself the centerpiece of the outfit and minimizes cluttering elements. Camilla Parker-Bowles looks like her outfits and accessories are in a wrestling match for attention. It’s not Royal – it’s a royal mess!

What do you think Royal watchers? Does Camilla need to take some style cues from Kate? Should she throw those awful hats in a wood chipper and streamline her look?

Is there a chance that Kate Middleton can put an end to Camilla’s tragic “busy is better” fashion philosophy?

Share your comments below and check back with CDL for all the latest Royal news and gossip!