Kate Middleton Stuck With Camilla Parker-Bowles In Shared Carriage At Trooping Of The Colour: Looks Furious 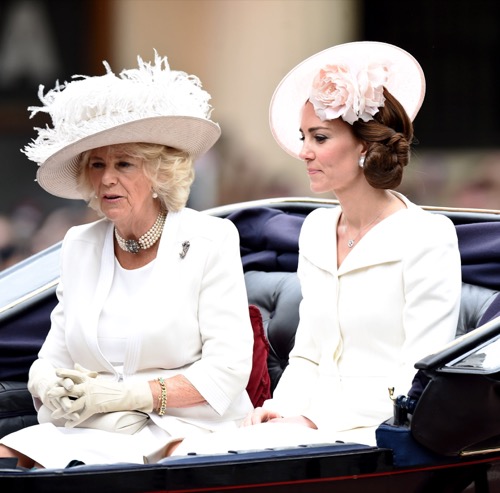 Why put two women who despise together each other even for a short carriage ride? Was there not another carriage available?

You must give Kate Middleton a little credit, she did try to listen to whatever Camilla Parker-Bowles was prattling on about. A sour faced and unsmiling Kate could not have looked more bored even if she tried. After about 30 seconds Kate slapped a fake smile on her face and turned to the crowd to give the commoners’ a Royal wave.

To make matters worse, someone forced Camilla and Kate to stand next to each other on the balcony at Buckingham Palace. Both Royal wives look spectacularly miserable.

Oh the screeching, crying and yelling that will take place at Kensington Palace tonight! Prince William will most likely never hear the end of this one. How dare William allow anyone to force Kate to share a carriage with Camilla! How dare anyone set up the family photo on the balcony putting Kate and Camilla together!

Who knows, maybe a Royal photographer wanted to get a picture of the two future Queens side by side.

Clarence House will be a fun place tonight as well, don’t you think? After a day spent with Kate you know Camilla’s going to grab the gin bottle and start pouring generous glasses while berating Prince Charles. Can you imagine lots of stumbling around and yelling at top volume?

Poor Prince Charles isn’t man enough to stand up to Camilla Parker-Bowles so there will be lots of “Yes, dear,” and “Of course darling,” and “I’ll speak to Queen Elizabeth sweetheart” going on.

Thank goodness that all these celebrations for Queen Elizabeth’s 90th birthday are over! Camilla and Kate won’t have reason to see each other, we hope, for quite some time. Everyone retire to their separate corners and refuel for the next round of Kate Middleton vs. Camilla Parker-Bowles. Come back to CDL for all you Royal news and gossip every day!