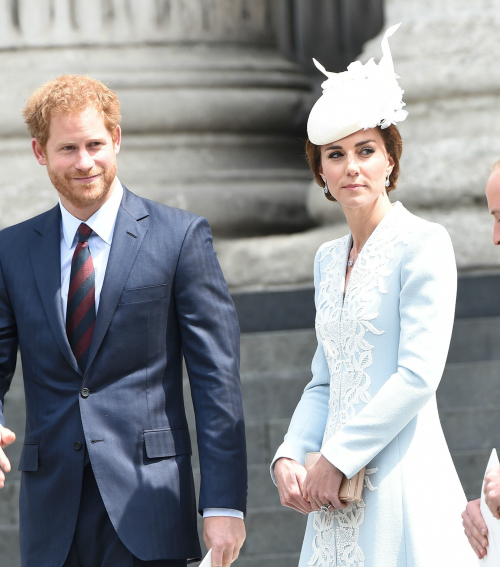 In the midst of the solemn service, Kate leaned in to allow Prince Harry to whisper in her ear. The intimate moment was missed by Prince William, but caught by cameras. Kate erupted into smiles and giggles after Prince Harry’s remark.

The ginger devil continued to amuse his beautiful sister-in-law by pulling faces and distracting her during his grandmother’s birthday event while Prince William remained stodgily attentive to the goings on in the church.

Is Prince Harry irresistible to Kate Middleton? Does Prince William have anything to worry about? Kate and Harry continues to share private jokes as the event progressed and shared another laugh with Prince Harry as the duo followed her husband down the aisle of the cathedral.

As Kate Middleton walked out, she turned back away from William to continue chatting and smiling at her brother-in-law. The trio even rode together and it’s obvious that Kate and Harry have an easy intimacy.

But has Harry’s wild charm begun to turn Kate’s head? Does she wish that Prince William was a bit more like his younger brother?

We have seen William try and loosen up lately and has even been taking selfies at royal events with fans – but there’s no comparison between the two brothers.

To be fair, Prince Harry doesn’t have near the pressure on him that Prince William does as the heir apparent. Although given how long Prince Charles has waited patiently to inherit the crown from Queen Elizabeth, it will be decades before Prince William has a shot at the throne.

But still, William is next in line after his dad and has to behave with decorum while Prince Harry can cut as loose as he wants. Harry’s devil-may-care antics do make him appealing to the ladies – and now it appears even Kate Middleton is caught up in his ginger appeal too.

What do you think royal watchers? Were Kate Middleton and Prince Harry being disrespectful by giggling during the Queen’s 90th church gala? Does Kate find Prince William dull compared to his wild ginger brother? Is Kate fighting a crush on her hunky brother-in-law?

Share your comments below and check back with CDL often for all your Royal news and gossip!