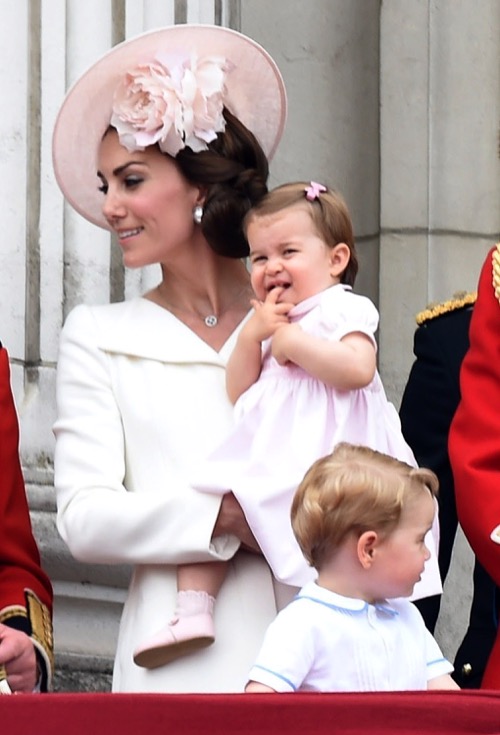 Kate Middleton chatted with guests about her own little Princess Charlotte, “She is very cute but she has got quite a feisty side,” she told one woman at a reception at London’s Guildhall after the national service of thanksgiving for Queen Elizabeth at St. Paul’s Cathedral. Oh dear. This cannot be good at all.

Was Kate Middleton really meaning to say, albeit politely Princess Charlotte’s becoming a mischievous little devil, a holy terror? Far be it for her to actually admit her child’s already showing signs of becoming a little hellion to a room filled with total strangers.

My goodness! what would Queen Elizabeth say? Perhaps Kate Middleton dodged a proverbial bullet? For now anyway. But what about in the years to come? What will they bring where Princess Charlotte’s concerned?

Up until now we’ve only heard how sweet and lovely little Charlotte is; an angel. It’s her older brother, Prince George that we’ve seen act like a little mischievous devil. Quite an odd reversal to hear from their own mother that Charlotte’s the one who might be the future trouble-maker. Especially when Kate Middleton hopes Prince George will keep his younger sister in check.

Although we shouldn’t be surprised to learn this from Kate herself. After all, Prince William fairly dotes on his little darling girl. From the day she was brought home from st. Mary’s Hospital, Wills has had nothing but praise for his baby girl.

What are most father’s known for? Spoiling their daughters, of course. Maybe Kate’s jealous of the close bond between father and daughter?

Plus Prince Charlotte has a perfect extravagant example in her mother to look up to, she’s well on her way to turning in to the brat of the family. Careful, Kate. We don’t want your lazy, expensive ways rubbing off on Charlotte. But really, we can’t hold a child responsible for her attitude and behavior when she has not only a mother who demands the finer things in life, but an aunt and pushy grandmother as well.

No wonder Will’s hair has been receding.

Perhaps Prince William wants to keep his Prince Charlotte sweet for as long as possible until Kate Middleton’s ways take hold – because it’ll be all downhill after that. Too bad, because Wills really loves his little girl. Come back to CDL for all your Royal news and gossip!

Members of the British royal family are seen standing on the balcony of Buckingham Palace during the 2016 ‘Trooping The Colour’ parade in London, England on June 11, 2016.