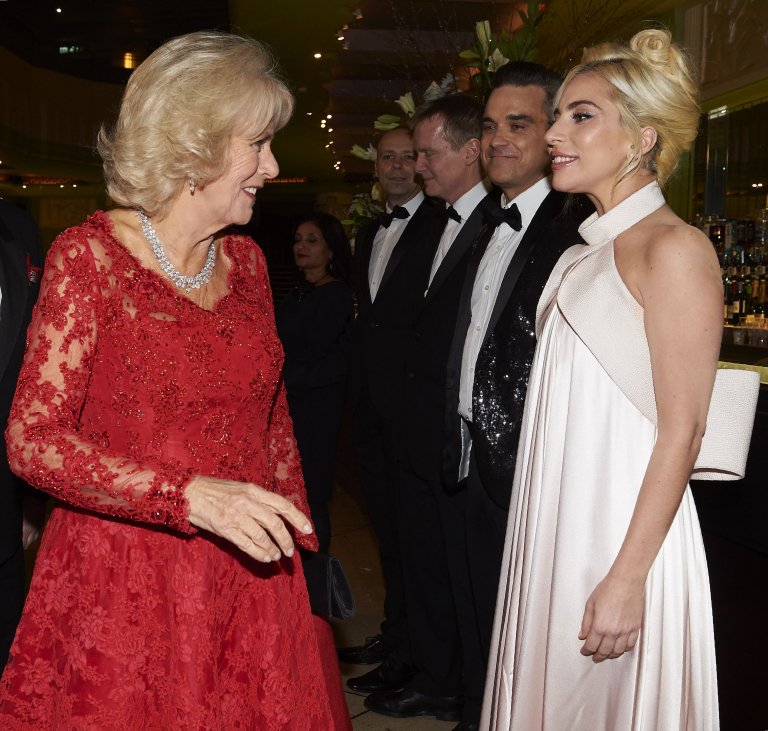 Camilla Parker-Bowles met Lady Gaga at the Royal Variety Performance on Tuesday, December 6 much to the chagrin of Kate Middleton. The Duchess of Cornwall and the diva had a chance to chat and Camilla revealed to Lady Gaga, “my grandchildren call me Gaga.”

As you can see, the Royal Variety Performances gala is an exceptionally important event. It is only fitting that guests of honor Camilla Parker-Bowles and Prince Charles, the next King and Queen, would meet Lady Gaga. Kate Middleton must be green with envy – Kate has been scrambling for years to make friends in Hollywood because she so admires the shallow lifestyle.

The normally dowdy Camilla looked stunning in a red lace ballgown and a matching wrap. Camilla was adorned with diamond jewelry which most likely came for Queen Elizabeth’s vast collection of Royal jewels. Chalk up another win in Camilla’s column. 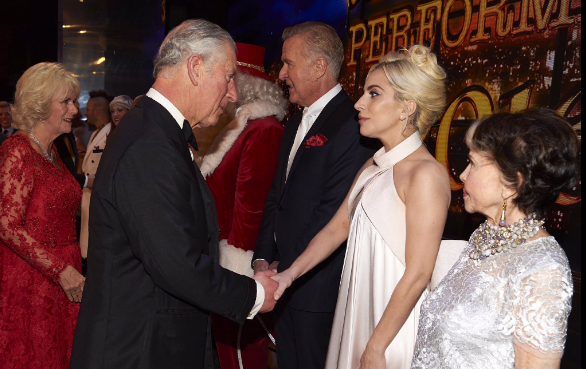 While Camilla is telling stories about her grandchildren to Lady Gaga, Kate has been relegated to the minor appearances. We’re not sure if Kate’s next Royal engagement, a special Cubs meeting with the Kings Lynn pack to celebrate 100 years of UK Scouting is a punishment or a request by the Duchess of Cambridge to lighten up her schedule.

The Duchess of Cornwall never seems to complain about any Royal engagement on her calendar. Camilla shows up for wine and cheese tastings, flower and garden shows, and benefits for the numerous charities of which she is a patron.

Kate Middleton, however, couldn’t be bothered to attend the annual EACH gala benefit on November 30 of which she is a patron. The Duchess of Cambridge’s unexpected absence from the East Anglia Hospice Charity benefit dinner sparked speculation that Kate is pregnant with the Cambridge’s third child.

Has Camilla Parker-Bowles slowly but surely become the shining star of the Royal Family? Has Queen Elizabeth forgiven Camilla for the decades long scandalous affair carried on with Prince Charles that nearly destroyed the monarchy?

Maybe Kate Middleton and Prince William will represent the Royal Family at the 2017 Royal Variety Performances gala. At some point the Duke and Duchess of Cambridge will need to stop hiding behind the excuse that they want a normal family life and start assuming some of the more important responsibilities from the senior Royals. Come back to CDL for all you Royal news!

Sting will also be at the event! The show will be broadcast later in December. Prince Charles will be in attendance.

At the Royal Variety performance, the Duchess of Cornwall tells @ladygaga “my grandchildren call me Gaga”. pic.twitter.com/VuM3nQ0s0M

The Prince of Wales & Duchess of Cornwall arrive for the 2016 Royal Variety Performance https://t.co/Zi7OKdkM6P pic.twitter.com/r2DU20212D