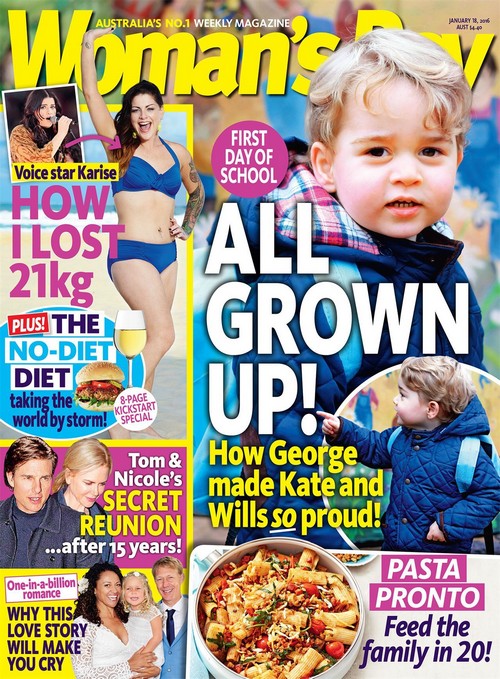 Does Kate Middleton have poor parenting skills is she too harsh on Prince George? Photos of the Duchess Kate on an outing appear to show the Duchess of Cambridge publicly scolding a poorly behaved Prince George.

Imagine that Queen Elizabeth is furious over this since Prince George is the future King of England and much higher ranked in the royalty than middle-class Kate Middleton!

The most recent cover of the Australian Woman’s Day features the snapshots the Cambridge’s shared as Prince George headed off to preschool. Other candid photos inside the magazine appear to tell a different story about Princess Kate’s mothering abilities and Prince George’s behavior.

British Monarchy Heir shared the photos from inside the January 18 edition. Kate Middleton and the third-in-line to the throne are casually dressed it what appears to be jeans. It looks as if George is wearing the same quilted blue jacket from his first day at the Westacre Montessori School.

Prince George and Kate Middleton may have done a bit of shopping – or might be headed to do so. When the photo was taken the Duchess of Cambridge looks fairly frazzled, perhaps at her wits end, with Prince George’s behavior.

Do you think it’s a mother and son outing gone wrong? Didn’t the Duchess of Cambridge bring a nanny along? Was Duchess Kate attempting to emulate the late Princess Diana? There were a few times Princess Diana publicly scolded Prince William and Prince Harry – and the moment was captured by the paparazzi. Of course Queen Elizabeth never liked Princess Diana much either….

Did Kate Middleton do the right thing? Was it wise to reprimand the future King of England in public? We can’t be certain, but the snapshot implies that Duchess Kate and Prince George were stepping off a curb to cross the street,

Do you think anyone Prince George being a naughty boy and the Duchess of Kate disciplining him? We wonder what onlookers thought of all that! Maybe the Duchess should have handed George off to a member of the Royal protection team if she was that aggravated by the two-and-a-half-year-old boy’s behavior.

Maybe Duchess Kate had been up all night with a cranky Princess Charlotte? Or are the future Queen’s parenting skills rusty after non-stop Royal responsibilities? Maybe Kate isn’t getting enough time with the wee ones?