Kate Middleton Pregnant Along With Pippa Middleton: Double Pregnancy Shocker – A Boy and A Girl- Report 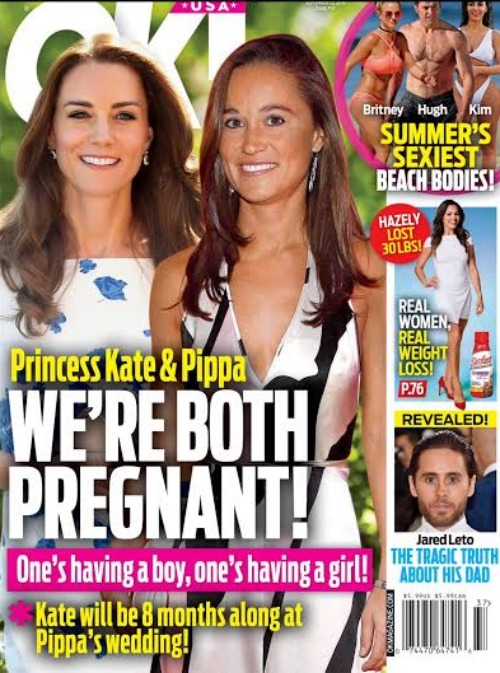 According to a magazine source, “They [Kate and Pippa] love the idea of being pregnant at the same time. They’re extremely close, and having kids the same age is something they used to talk about when they were little girls.”

It is extremely unlikely that either Pippa Middleton or Kate Middleton are pregnant. Pippa Middleton and James Matthews are planning a wedding—not just any wedding, but a wedding that is sure to be covered by the media in full detail around the world—and would not want to get pregnant while doing so.

Further, for obvious reasons, Pippa would not want to be pregnant in her wedding dress. As for the royal couple, both Kate Middleton and Prince William are too busy with their royal duties to be expanding their family at this time.

And, because of her sister’s upcoming nuptials and the countless photos that she will be featured in, it is unlikely that Kate would want to be pregnant in her bridesmaid dress. Plus, with two small children already, the royal couple has their hands full: Prince George is now 3-years-old while Princess Charlotte is one-year-old.

Having two toddlers and being a royal is no easy task and it’s unlikely that Prince William and Kate Middleton would want to have another child in the midst of raising their children, performing their royal duties and helping to plan and participate in Pippa Middleton and James Matthews’ wedding.

Pregnancy rumors have plagued the royals since their wedding and it appears that the same speculation will now follow Pippa Middleton and her soon-to-be husband as well. While everyone loves the idea of the Middleton sisters both being pregnant at the same time, these rumors are probably false.

What do you think of the latest pregnancy rumors? Are Kate Middleton and Prince William expecting their third child? Will Pippa Middleton be walking down the aisle in a maternity-size wedding dress? Will James Matthews and Pippa start a family soon after their wedding or wait in order to enjoy their honeymoon phase? Tell us your thoughts in the comments below and come back to CDL for all your Royal news and reports!