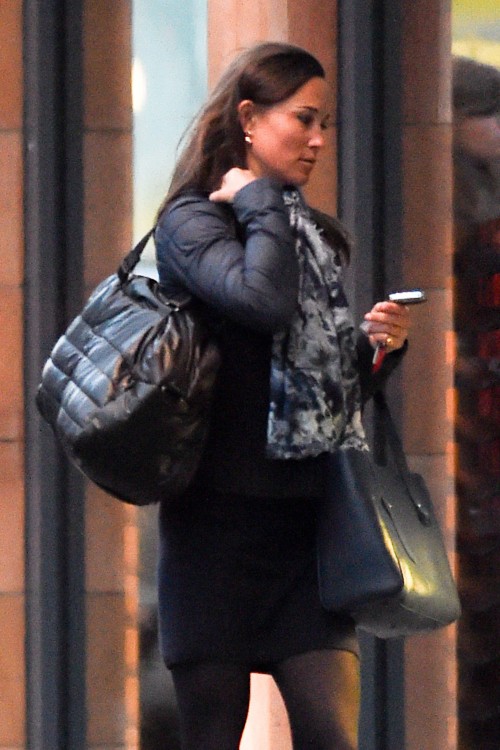 Pippa Middleton, younger sister of Kate Middleton, and girlfriend to James Matthews, has kept a low public profile these past few weeks. Last month, the Daily Mail reported that Prince William has been advising Pippa on her personal and career choices – and the pressure is on to wed.

William has apparently convinced Pippa to ditch her less than successful media career for one where she’ll focus on fundraising, charity events and, most importantly, marriage. Prince William and Kate Middleton included James Matthews in this important discussion.

If reports are correct, James will help Pippa enter into her new role by proposing to the socialite in September. Pippa reportedly took the Prince’s sage advice. Save for participating in a few charitable sporting events, we’ve not heard a peep from Pippa in a while.

It’s been over a year since she contributed columns for Vanity Fair or the Spectator; and months since she wrote for the Party Pieces blog, her family’s company. Her 2012 book, ‘Celebrate’ had less than stellar sales and was not received well by critics.

One reason Prince William and Kate Middleton insisted on a career change for Pippa was due to Pippa’s association to the royal family. William, according to friends, was worried that Pippa would sell her name like his Aunt Sarah Ferguson did after her divorce from Prince Andrew.

William doesn’t want the family’s name besmirched yet again, so insisting Pippa Middleton change careers was imperative. Thankfully, James Matthews swooped in to save the day. What could Prince William and Kate find wrong with a millionaire hedge fund manager for Pippa?

Since the start of their relationship earlier this year when Pippa moved into his sprawling West London mansion, we’ve heard not a ripple of discontent from either party. In contrast, there was always some drama happening in her past relationship with Nico Jackson.

So it doesn’t come as much a surprise that James could pop the question, and soon. According to the Daily Mail, the millionaire is planning a trip to the Caribbean island of St. Bart’s in the fall. James intends on asking for Pippa’s hand at his parent’s exclusive resort, Eden Rock.

The Daily Mail also says that a ‘save the date’ card is being circulated amongst close friends with a message: “Don’t Tell Pippa.” Carol Middleton, of course is in on the big surprise. And Pippa’s younger brother, James, probably is too.

Now that he’s back with Donna Air, could James Middleton be feeling the pressure to beat his older sister down the aisle? Of course, the Middletons know how to milk up the media attention while at the same time publically pressuring their daughter’s boyfriends of the current day to propose.

They did it while Prince William and Kate Middleton were dating, particularly during that rough time in 2007. And they did it when Pippa was dating Nico Jackson and her boyfriend before him. Like Prince William, James Matthews seems to be made of sterner stuff.

He’s not going to allow the Middletons or the gossips to dictate when, or where he’s going to bring up marriage to Pippa. According to friends, he’s very much into her – And he’s definitely what Pippa’s been searching for as well.

What are your thoughts on this CDL readers? Do you think James Matthews will actually propose to Pippa Middleton in September? Will he get cold feet? Let us know in the comments. Be sure to stay with CDL for all the latest news and gossip on The Royals.