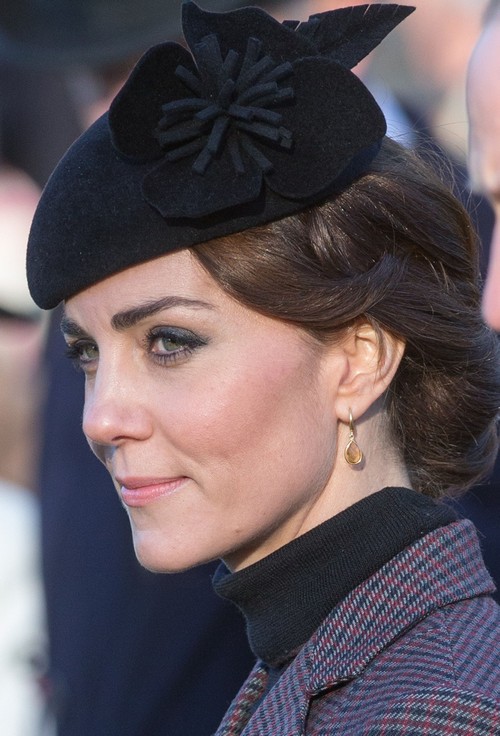 Kate Middleton and Prince William accompanied Queen Elizabeth, Prince Phillip and several family members who attended a ceremony to honor those who died at the Gallipoli campaign yesterday in Sandringham, England.

Among the royals were several family members who were in town to celebrate Kate Middleton’s 34th birthday last week. Kate’s sister Pippa Middleton was of course attending, but we also got to see her hot brother James in attendance. I am loving his hipster beard… he wears it quite well, don’t you think?

Kate’s parents, Carole Middleton and Michael Middleton were also in town for her birthday celebration and attended church with the royals.

Prince William and Kate Middleton joined Queen Elizabeth and Duke of Edinburgh at the ceremony which took place at the Sandringham Memorial Cross where they laid beautiful wreaths of “roses” adorned with the royal insignia from Buckingham Palace that read,

“In memory of the glorious dead”

This day marked 100 years since the end of the Gallipoli campaign which took place during World War I.

In case you’re like most people here in the States, you’re probably not all that familiar with this battle from World War I. The Gallipoli Campaign which is also known as the Dardanelles Campaign, the Battle of Gallipoli or even the Battle of Çanakkale was a battle that took place during of World War I on the Gallipoli peninsula which is in modern Turkey. It lasted 8 months, 2 weeks and 1 day, from April 25, 1915 (Anzac Day) – January 9, 1916.

That is a really long time to be in a battle and so many lives were lost……around 58,000. It’s really beautiful to see the royal family honoring all those lives that were lost in such a symbolic, beautiful ceremony.

Kate Middleton looked as sophisticated as ever in her brown tween blazer and skirt, with knee high black books to polish off the look. I am pretty sure that she could wear a potato sack and still look like a million bucks. Always a class act, always.

There was no sign of Prince George and Princess Charlotte the church service or the ceremony following. They stayed at home while their loving parents attended the ceremony, which originally, they weren’t scheduled to even be there.

I am sure that the Queen and all others in attendance were quite please to have Prince William and Kate Middleton there to share their support and pay their respectful honors to the fallen. Come back to CDL often for all you royal news!

The Duke and Duchess of Cambridge attend a poignant ceremony honoring those who died in the Gallipoli campaign on January 10, 2016 in Sandringham, England. William and Kate joined the Queen and Duke of Edinburgh at a wreath laying service held at a war memorial on the monarch’s Sandringham estate. The couple were not scheduled to attend the ceremony, which marked the 100th anniversary of the end of the disastrous First World War campaign on the Gallipoli peninsula. But after attending a traditional Sunday service at Sandringham’s St Mary Magdalene Church with the Queen and Prince Philip; they walked behind the monarch to the nearby war memorial cross. The Duchess, who celebrated her 34th birthday yesterday, was joined at the church by her parents Michael and Carole Middleton as well as her two siblings – sister Pippa and brother James. FameFlynet