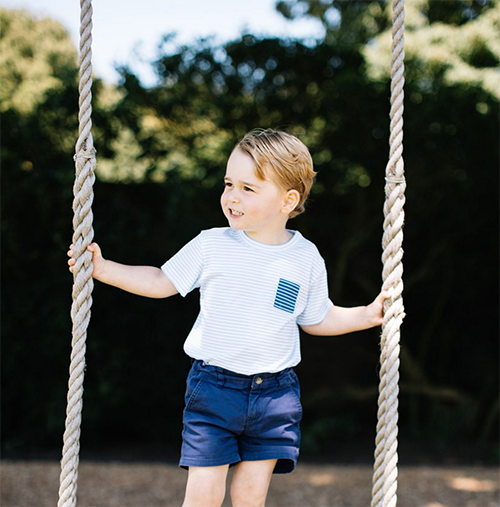 Kate Middleton and Prince William released new photos of Prince George in celebration of the prince’s 3rd birthday. The photographs were taken by Matt Porteous at the Duke and Duchess of Cambridge’s Anmer Hall home in Norfolk.

All of England is celebrating George’s birthday today, not just the Royal family and the Middletons. At Westminster Abbey, where Kate Middleton and Prince William were married on April 29, 2011, the Abbey Bells were rung to honor Prince George.

In one photo, George is barefoot and standing on a wooden swing engraved with his parents’ names. Prince George is dressed in a blue and white striped shirt and blue shorts, is happy, relaxed, and smiling just a little bit.

Another photo shows George sitting on the same wooden swing. Kensington Palace captioned this photo, “The Duke and Duchess of Cambridge thank everyone for all the lovely birthday messages they have received for Prince George.”

Perhaps the most adorable photo is of Prince George with the Cambridge’s black cocker spaniel Lupo. The blond prince is kneeling on a picnic blanket and smiling as he offers Lupo a treat. The photo is captioned, “Can’t believe it’s been three years already!”

Carole Middleton and the rest of the Middleton family, of course, will celebrate George’s birthday in style with Kate Middleton and Prince William. But will Queen Elizabeth, Prince Charles, and Camilla Parker-Bowles throw a separate party for Prince George in order to avoid the Middletons?

We wonder if Prince George received that $2,300 Bolonka Zwetna puppy and Royal Scott train set everyone has been talking about. Grandpa Charles supposedly will gift his grandson with a Dinky and Corgi golden Aston Martin “James Bond” toy car and a silver comet BOAC jet from Dinky Garage.

Will Aunt Pippa Middleton and fiancé James Matthews join in the celebration of George’s 3rd birthday? Pippa can show off her engagement ring to the Royals and everyone can courteously gush over the huge diamond. Hopefully George’s future millionaire hedge fund manager uncle remembered to buy a gift in all the excitement of proposing to Pippa.

Happy 3rd birthday to Prince George! The photos of the adorable blond future King are appreciated by Royal watchers.