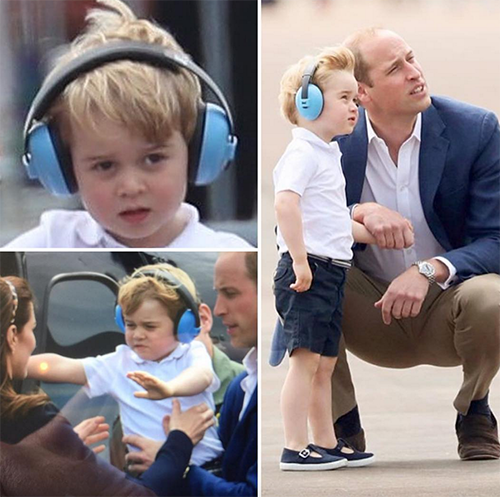 Kate Middleton and Prince William attended the Royal Institute Air Tattoo show in Fairford with Prince George on Friday, July 8. The Duke and Duchess of Cambridge had a little bit of trouble keeping there almost 3-year-old son under control.

Prince George had a bit of a temper tantrum, probably because it was such a long day and there were many frightening noises.

William did his best to comfort George when some unexpected noises frightened the toddler. But George did not want dad – he reached out his arms for Kate Middleton. Eventually, Prince George got used to all the loud noises and enjoyed inspecting the planes and helicopters and meeting a pilot or two.

VIDEO#2: Prince George is too cute! Curious boy (though it seems he found some noises quite terrifying) #RIAT16 https://t.co/bLFui3Y4za

George got to sit in a Squirrel helicopter with Kate Middleton. The Squirrel is the same helicopter Prince William trained in at the Royal Air Force Shawbury in 2009. This is the very first time Prince George has visited the Royal Institute Air Tattoo show. We’re sure it’s not the last.

It’s no surprise that Prince George had such a good time at the Air Tattoo show on Friday. George often asks for toy planes and helicopters as gifts. George’s third birthday party will be Royal Air Force themed.

According to the Crown Chronicles, the Air Tattoo show is one of the United Kingdom’s premiere outdoor events and is an extravaganza of entertainment for the entire family. Hopefully, George got to enjoy the Techno Zone, which is an interactive showcase designed especially for youngsters.

It looks as if Prince George has a very early start on his love for planes and helicopters. It’s very possible that George will follow in Prince William’s footsteps and serve in the Royal Air Force.

TODAY: the Cambridges have arrived at the RAF Base to attend the royal international air tattoo!! How cute is little George!! 8th of July 2016 #princewilliam #katemiddleton #princegeorge

A photo posted by Duchess Of Cambridge (@hrhduchesscatherine) on Jul 8, 2016 at 4:58am PDT