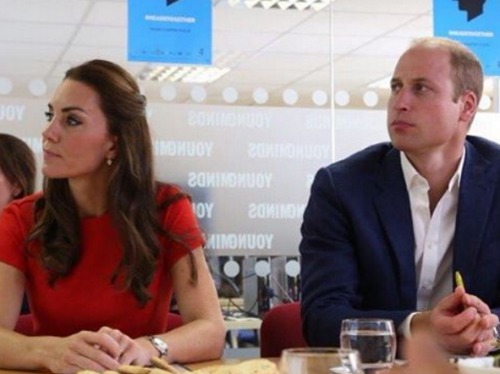 Kate Middleton and Prince William made a secret visit to a mental health helpline on Thursday, August 25. The Duchess of Cambridge must have been shocked when the Duke of Cambridge had a bit of an emotional breakdown when asked to take a few calls.

Kensington Palace shared that the Cambridge’s learned about the support the volunteers offer to those who reach out to the call center for help. Kate and William and were asked to listen in on a few phone calls with the volunteers.

Richard Palmer, Royal reporter for Express, revealed that William nearly had a meltdown and asked that that the center directors let him listen in on some easy calls. What did Prince William say, “I’m carrying a lot of things at the moment. I’ll be in a flood of tears at the end otherwise. I’ve had too many sad families with the Air Ambulance. I can’t deal with any more stuff. Just maybe at the lower level, if I can.”

Despite William’s request he did hear some very distressful stories about parents who had reached out for help with their children. Volunteers explained to Prince William and Kate Middleton that sometimes they do get very emotional during these conversations. William related to their feelings, reportedly saying, “How do you keep your own emotions out of it? How do you keep your own story out of it?”

Prince William and Kate Middleton have become champions of mental health awareness, jointly supporting Heads Together. Kate Middleton is a patron of the Anna Freud Centre as well as Place2Be. The Cambridge’s have publicly stated that they would not hesitate to seek professional help for Prince George or Princess Charlotte if need be.

Is one of the many emotionally charged things William is dealing with right now is the anniversary of Princess Diana’s tragic death on August 31. William was only 15-years-old when Diana died following a tragic car accident in a Parisian tunnel in 1997.

With so many things weighing on Prince William’s mind at the moment perhaps the Duke of Cambridge is in need of professional mental health guidance. But Royals don’t go running off to psychiatrists, they don’t go spilling Royal secrets about their emotions. Royals keep a stiff upper lip, smile and pretend everything is perfect – don’t miss all your favorite Royal news at CDL.

The Duke and Duchess of Cambridge continued their @heads_together campaign to change the way we talk about mental health by visiting a helpline for parents who are concerned about their children’s wellbeing. They met the volunteers who answer calls and learned about the practical support offered, to help understand what happens if you pick up the phone and reach for support. The Duchess said afterwards: “As a parent, and as a mother, having that feeling that there is somebody there that is non-judgemental, that can provide the professional support, can really provide a helping hand at a really difficult time.”