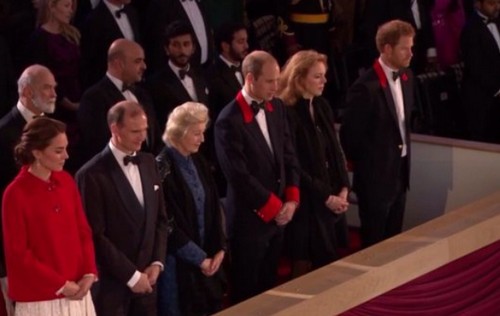 Is Kate Middleton emulating a young Queen Elizabeth’s fashion sense in a desperate attempt to win favor with Her Majesty? Have the put downs from Sophie Wessex thrown the Duchess of Cambridge into a tailspin? Is that why Kate Middleton wore a red Zara blazer that is suspiciously similar to one worn by Queen Elizabeth in her younger years?

It’s no secret that Kate is nowhere the fashion icon Princess Diana was. Recent photos shared by the Royal Trust Collection of Queen Elizabeth’s exquisite ball gowns show that Kate isn’t even close to being as fashionable as Queen Elizabeth either.

Grasping at straws since Countess Sophie Wessex threw a few more criticisms Kate’s way, most recently by subtly calling out Kate as a hypocrite, the Duchess of Cambridge is desperate to be the favorite.

Kate talks a good game about raising Prince George and Princess Charlotte as normally as possible. Kate has even said she and Prince William often prepare healthy meals together for the Cambridge family.

When it comes down to it Kate Middleton is nothing but a superficial commoner who brings George and Charlotte out for convenient photo opportunities. Sophie Wessex, on the other hand, keeps Lady Louise and young son James out of the public eye as much as possible.

In a recent interview Sophie pointed out that Louise didn’t even realize that THE queen was her granny until recently. The young girl is still having trouble grasping the concept that Queen Elizabeth is her grandmother, she just sees her as granny.

Queen Elizabeth and Sophie Wessex also share a love of horses and history, neither of which particularly seem to interest Kate. Is Kate using fashion, in this case, copying the stylish outfits of a young Queen Elizabeth, to become number one in Queen Elizabeth’s heart?

Fashion is not a primary concern of Queen Elizabeth’s these days and if Kate thinks that’s the way to win her grandmother-in-law’s favor Kate Middleton will be woefully disappointed.

Horses, history, corgis, Prince Philip’s health, what’s going to happen to the monarchy when Prince Charles takes the throne. That’s most likely what occupies Queen Elizabeth’s thoughts these days. Kate’s wardrobe is the least of Queen Elizabeth’s worries. Unless there’s a Middleton wardrobe malfunction involved! Come back to CDL for all of you Royal news and gossip!