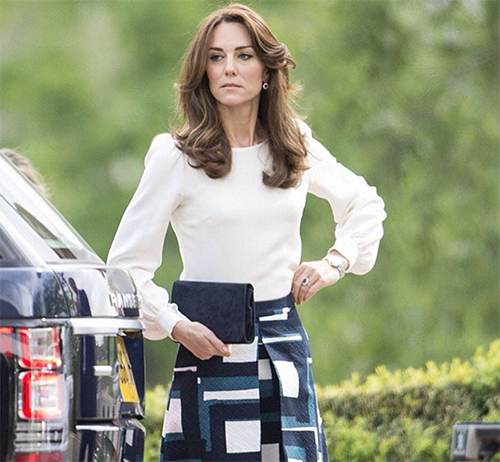 Is it possible for Kate Middleton to be more miserable? The Duchess of Cambridge looks as if she were forced to attend the Heads Together mental health awareness campaign launch with Prince William and Prince Harry.

Kate was all smiles as she arrived at Queen Elizabeth Park with William and Harry to kick off a day filled with presentations by mental health charities. But Kate must have thought the photographers had taken a break as she stepped around the back of a car because she looked positively miserable and overtired.

Dressed in a cream-colored blouse and an odd skirt, Kate brought out the mean face. Is that the one Prince William saw when arriving home from ex-girlfriend Jecca Craig’s wedding? It wasn’t long before Kate slapped on her phony ‘so nice to meet you and thrilled to be here’ face. The only genuine smile appeared to be one for Prince Harry.

Was the ginger-haired prince telling his sister-in-law a joke as he covered his face a bit? Kate certainly was giggling as she glanced her brother-in-law’s way. Prince William was standing on the other side of Kate with the practiced and very phony Royal smile.

As the Royal dynamic trio walked in to participate in the Heads Together event there was another Kate smile, but was it genuine? Who knows? At least there weren’t any wardrobe malfunctions. It may have been a bit windy as the Duchess of Cambridge’s hair did appear to be blowing back. But Kate’s skirt stayed in place. Did someone finally just sew some weights into the hem?

Prince William, Kate Middleton and Prince Harry split up and visited many of the mental health charity’s exhibits at the Heads Together event. Later in the day, the young Royals gave a joint speech. Kate was in the center, Prince Harry on one side and Prince William on the other.

Maybe Kate Middleton was just tired. The Royal family did enjoy a long night of festivities celebrating Queen Elizabeth’s 90th birthday. How exhausting it must be to stay up late and then roll out of bed early the next morning to attend yet another Royal engagement. Poor, poor pitiful Kate, forced into spending time with Prince William.