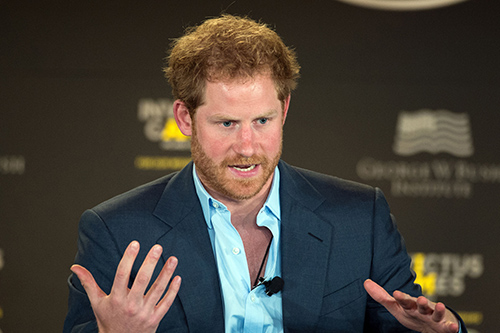 Prince Harry may have found love at the Orlando Invictus Games 2016 and the new lady in his life could be Barbara Bush, daughter of former President George W. Bush. Would Prince Harry seek out Kate Middleton’s stamp of approval on his choice for a Royal bride?

Harry was interviewed by Jenna Bush Hager as the Invictus Games 2016 began. The Today Show reporter offered to give Harry her twin sister Barbara’s phone number. That would certainly be an interesting pairing.

Would Kate Middleton approve of Barbara Bush? The co-founder and president of Global Health Corp would certainly be a better choice than Cressida Bonas. The Duchess of Cambridge would probably go out of her way to make sure anyone but Cressida ends up married to Prince Harry.

Going back a bit, Cressida is the half-sister of Isabella Calthorpe. If you remember, Isabella is the woman Prince William went chasing after breaking up with Kate Middleton. Isabella didn’t want William so he crawled back to Kate. Yes, anyone would be better than Cressida.

Did Prince Harry take Jenna up on the offer and get Barbara’s phone number? It wouldn’t be the first time the Royal family had an American president’s family member in their lineage. Princess Diana was related to, in one way or another, presidents George Washington, John Adams, John Quincy Adams, Calvin Coolidge, Millard Fillmore, Rutherford B. Hayes, Grover Cleveland and Franklin D. Roosevelt.

Barbara, like Princess Diana, has worked with AIDS patients. The Yale graduate spent time in Tanzania, South Africa and Botswana as part of the International Pediatrics AIDS Initiative.

Wouldn’t it be interesting if Prince Harry met Barbara Bush while at the Orlando Invictus Games? Perhaps Harry took Barbara on that private tour of Disney World and the ride on Space Mountain? Could the daughter of a former United States president win the heart of the fifth-in-line to the British throne?