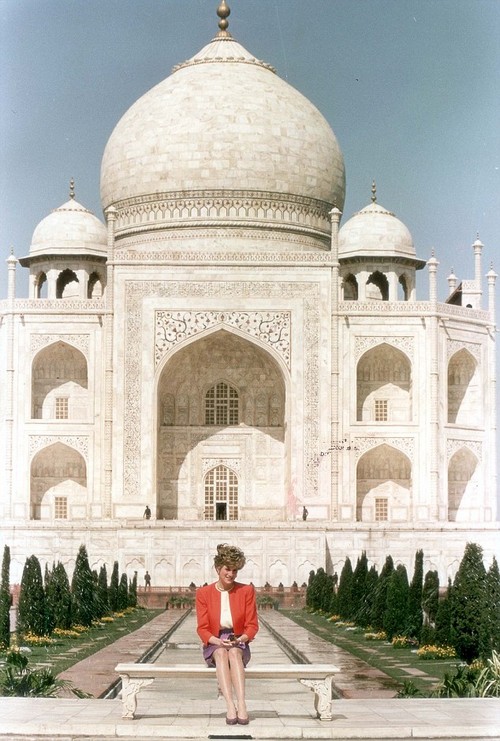 Kensington Palace has released the details and itinerary for the Duke and Duchess of Cambridge’s trip to India and Bhutan next month. The Royal couple will make many stops, but the most important of all may be the one to the Taj Mahal on April 16 just thirteen days before Kate and William’s anniversary.

Perhaps Kate thinks recreating the iconic and heartbreaking Princess Diana moment will soften William’s heart and the second-in-line to the throne will forget all about ex-lover Jecca Craig.

The last thing the future King needs is photos of an unhappy Duchess of Cambridge sitting alone outside the world’s most famous tribute to love. Queen Elizabeth has probably already called Kate and William to Buckingham Palace for a meeting and demanded the couple act happy and loving while in India.

Can you imagine Queen Elizabeth wagging her finger at Prince William and informing her grandson that it is absolutely necessary that William hug and kiss Kate outside the Taj Mahal! At the very least hold Kate’s hand or put his arm around Kate’s shoulder.

This trip to India could be a tense one for Kate Middleton and Prince William don’t you think? Kate’s probably still fuming over William taking off to Kenya for ex-girlfriend Jecca Craig’s wedding.

Maybe the trip to Kenya was William and Jecca getting one more intimate weekend in before William heads off to India with Kate? Yes, we know, Jecca got married Easter weekend. When did that ever stop the men of the Royal family from a romp? For that matter, when did it ever stop a Royal mistress?

The Royal minders need to keep a sharp watch on Kate Middleton and make sure she doesn’t sneak off and get in a Princess Diana “I’m so lonely, look at me, poor, poor pitiful me sitting here in front of the Taj Mahal all by my lonesome. My husband doesn’t love me, boo hoo!” moment.

No one in the Royal Family may care what Kate thinks these days, but the future Queen can still manage to do harm even if no one cares what she wants.