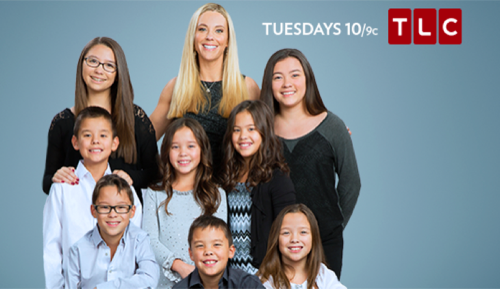 Tonight on TLC Kate Plus 8 returns with an all new Tuesday Janury 5, season 4 episode 5 called, “Deck Party,” and we have your recap below. On tonight’s episode Kate Gosselin throws a party to celebrate the completion of her new deck.

On the last episode, the Gosselins did landscaping as one their summer projects, but they also took time for lemonade, yoga and an unexpected burial. Did you watch the last episode? If you missed it, we have a full and detailed recap right here for you.

On tonight’s episode as per the TLC synopsis, “Kate throws a party to celebrate the completion of her new deck. Also: Kate and girls enjoy a day at the spa; and the boys learn magic tricks.”

Tonight’s episode is going to be filled with the usual Kate Plus 8 drama and you won’t want to miss it, so be sure to tune in for our live coverage of the show tonight at 10 PM EST! What kind of drama do you think will unfold in this fourth season of Kate Plus 8? How excited are you that Kate Plus 8 is back with an all new fourth season? While you’re waiting for tonight’s episode, sound off in the comments below and tell us what you’re looking forward to most this season and from which Gosselin.

#KatePlus8 starts with Kate planning a big new deck for her house. She says she’s been saving since she bought the house and is thrilled. She says they could make more use of the patio and pool area if they didn’t have to lug stuff all through the house to get outside.

She says it’s a logistical nightmare to eat out. She’s also planning a fire pit. She yells at Lex for not wearing play shows outside. Kate makes breakfast fast and says she’s trying to get so much done this summer. She says she has a special day planned for the boys.

She says she wishes she could do it more often but there’s so much going on – she takes the boys to meet a magician to learn magic to perform a show for the family. Aaden doesn’t care for magic but the other two boys are into it.

They meet the magician at a park gazebo. His name is Eddy and he starts out by blowing up a balloon. He asks for Kate’s phone and she doesn’t want to hand it over since she just got a new one. She finally gives it up.

He puts the balloon around the phone then pops it and hands it back. Kate wipes it off and pulls a face. The boys say they know how to do that trick and it’s easy. Next Eddy does card tricks. He shows them some basic magic and then how to do it themselves.

Kate says he’s a good teacher showing them how to do the tricks. Kate wants them to learn enough tricks to do a short show. Kate says she tried to be invested and learn it. She’s micromanaging then says she was trying to look out for their best interest.

Kate says they were totally focused on him throughout the lesson. They head for lunch afterwards and Kate talks to them about planning their magic show for the girls. Kate says she was getting nervous since the girls will be critical and the boys might feel vulnerable.

Kate says your family is always your greatest critics. She says even if the girls mock them, keep going. Kate talks about props they need and can make. Kate says that will be her art project. They stop by the party store to pick up some magic props and supplies.

Kate has a brain cramp and can’t remember how to spell magic. She also gets chocolate coins and a donation bin for the girls to participate somewhat. While the boys practice their magic, Kate takes the younger girls to a salon for a girl’s day.

They get manicures and the girls are thrilled to be pampered. Kate recollects when she made a mistake about having the girls hair braided and beaded at the beach years ago. Kate likes their nail colors and says they won’t let her pick anything for them ever.

Next they go to learn some braids for their hair. Kate says she has five girls and can’t braid and wishes she knew how. They each get a stylist to teach them. Kate tries to figure it out on her own hair. Kate says she sort of got it. She says Hannah is a good braider.

Leah braids Kate’s hair for her. The girls were thrilled with their spa day and says it was fun to hang out with just them for a change.

It’s time for the magic show and Cara and Mady wonder if it’s going to be bad. Kate helps them get set up. The boys think their sisters will be mean to them over this. The girls get the chocolate coins and the donation box.

The girls discuss throwing the coins at the boys. The boys are ready for their show. She wants them to introduce her as their assistant so she won’t seem like a micro-managing mother. The girls all come in. Kate is sad that the girls aren’t interested when the boys worked so hard.

They do one trick and the girls throw a coin at them and Kate says stop it. Kate says they’re stressing her out. Kate says your family is the hardest on you and Eddy warned them. The girls like the coloring book trick and Mady says she doesn’t know how he did it.

The boys take a bow and the girls clap. The girls complain that they didn’t get to learn how to do magic. Kate says the boys did well with just one day of practice. Kate puts on a fake mustache and jokes with them.

Kate is thrilled that they’re decorating the new deck today then they’re having a big party tomorrow. The girls start helping build a chair and talk about how Kate isn’t handy at all. Mady says Kate just pretends she can’t build things.

Kate says one part is missing and that’s the issue. They take stuff to the deck and Kate is bossy as usual. Kate freaks out over some rusty water from a table on the new deck. Kate says she’s being OCD like usual but says she’s trying to rein it in.

Next they start cooking for the party. Kate calls this the party of a lifetime to celebrate the new deck. Kate is happy it’s so easy to get stuff to the new deck. Guests start showing up and Kate is still making stuff.

Kate makes grilled shrimp and salmon. The kids made pasta salad and they did cheeseburgers and guac. Kate has about 30 people and has close friends and family there. She says the deck is for their guests too. Kate loves the new deck and says she’s never moving now.