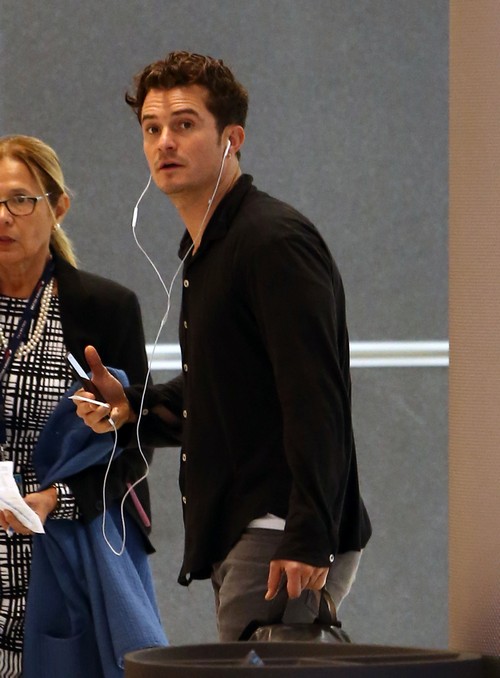 Orlando Bloom and Katy Perry were flirting and made their rounds as a flirty duo at multiple Golden Globes after parties last night. John Mayer, who? Let’s be honest here. Who would like to deny that Katy Perry and Orlando Bloom look a million times better together than John Mayer with Katy Perry? That’s what I thought. All I hear is crickets.

So what exactly is going on with these two hotties? Are they officially friends? Friends with benefits? Or could this be the beginning of something legit? I suppose all we can do is wait and see what surfaces in the coming weeks. Flirty fun without attachments is always a good time. But I would personally enjoy watching these two together for a bit.

There are about a million and a half pictures… okay, not quite that many. But a lot of pictures all over the place that were snapped last night of this possible new couple. The most telling, in my opinion are the ones where Orlando Bloom is whispering in Katy Perry’s ear.

Aren’t you just dying to know what he’s saying? Is he telling her how hot she looks in that dress? Or how he’s had a crush on her for ages? How about, “you wanna make out?” Heck, why not? At one point in the night, Orlando was even sipping on Katy’s drink. That’s awfully cozy, now isn’t it?

Time will tell with these two, and for now, I shall keep my fingers crossed that something “Blooms” out of this… tee, hee, hee.

What else is going on with these stars? Well, Katy Perry is planning to drop her fourth full length album sometime in 2016, so that is naturally something to look forward to. Prism is still doing really well, but I will be doing the happy dance when her new album arrives.

Orlando Bloom will not be letting us down this year. He’s got plenty in store. The Digging For Fire star will be starring in Romans first… this one is going to be a very disturbing drama that I may not be able to stomach. Next will be Unlocked which is right up my ally, being an action thriller, based in London.

And finally, we will be treated to Pirates of the Caribbean: Dead Men Tell No Tales. This one won’t be coming to the big screen until 2017, so you will have to be patient! But it will be totally worth the wait!