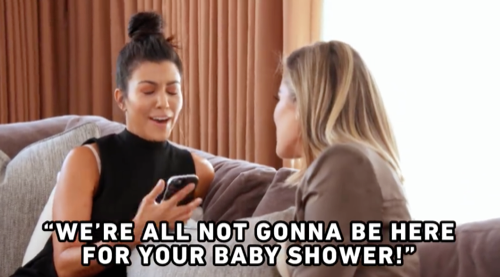 Tonight E!’s most-watched series Keeping Up With The Kardashians (KUWTK) returns with an all-new Sunday, November 20, 2016, episode.  On tonight’s KUWTK called, “No Good Deeds,” as per the E Online synopsis, “the family plan a baby shower for Rob Kardashian and Blac Chyna, who end up ruining the party with their fighting.”

On this week’s episode of Keeping Up with the Kardashians, the girls get together and decide to do special for Chyna because they are going to miss her baby shower due to obligations that are going to have them out of the country. They call Chyna and tell her that they will plan something special with her before they go.

Kim has to sign paperwork for Khloe for some of her business ventures. Kim says “My mom has always been our business manager, but lately, she has been dropping the ball. I know how frustrating it can be to not be able to get things done so I want to help her out as much as I can.” While they are meeting one of the PR assistants comes in and tells them that Kris has been in accident. They are all shocked. Khloe says “I had no idea that my mom was in an accident. I don’t know how bad she was hurt or anything.”

Kris says “It happened so fast you don’t have time to think. You just brace for impact. Within minutes my kids sprang to my side which was a comfort because in an instant my life can change.” Everyone is super emotional after the accident. Khloe says “When we drove up we still didn’t think it was big.Kylie started crying and we started wondering what if it was the last time we saw mom?”

After the accident, Kris is still shaken up, but she is trying to manage Kylie’s trip to Australia. Kim is there and steps in to help. She calls Kylie and asks her “Would you ever consider using someone from Australia to save money?” Kylie says “No.” Kim says “Well call me and let me know if you still want to go.”

Rob stops by Khloe’s house to talk. Scott is there too. Khloe asks him “How are you and Chyna?” Rob tells her “We aren’t living together anymore.” Khloe and Scott are shocked. Khloe says “I thought Rob and Chyna were doing better.” She asks him “Are you guys still engaged?” Rob tells her “I’m not comfortable at her house and she isn’t comfortable at mine.” Rob says “I don’t expect to get the ring back if we  aren’t.” Khloe starts asking questions about whether or not Rob knows how to take care of a baby. Rob says “I am a first-time dad so I will figure it out.”

Khloe takes Rob to look at the guest house. Kim asks Scott “What do you think about Rob and Chyna not living together?” Scott says “I’m not the best example. Hopefully, he can put the baby first and then they can figure out a way to make it work.”

Kim is filling in for Kris while she is recovering from the accident. She tells Khloe “I have set up your meetings with Whale Rock so that you can sell the products on your website.” Khloe says “Kim has built her own empire so she is perfect for being the mini Kris Jenner.”

Kim is super busy taking over managing the careers of her sisters. She is working on keeping everything straight for Kylie’s shoot in Austrailia including the travel arrangements, Khloe’s book signings and all of the appearances and fashion shows that the girls have going on. Kim says “I had no idea how hard it was managing the careers of five girls.”

Scott has arranged for a lady to come and help teach Rob the basics of dealing with a baby. The lady shows Rob how to hold and dress the baby. She also shows him how to cut the umbilical cord and she tells him “Nurses don’t want dads to feel guilty if the baby has an outtie.” Rob and Scott laugh. Scott says “Rob seems to know his way around a baby, but dealing with a plastic doll is much different than an actual baby.”

Khloe has a meeting for her Khloe Fit line to set up her product line and decide what products are going to be marketed. She’s frustrated when Kim doesn’t show up. She calls her and says “I thought you were going to be here for my product line meeting.” Kim tells her “I had to be here for Kylie’s thing.” Khloe is not happy. She says “Kim said that she would be there for me, but i am always the forgotten one.”

After the meeting Khloe tells Kim “How can you say you are better than Kris Jenner when you act just like her?” Kim tells her “I’m sorry I wasn’t there for your meeting, but I had to be there for Kylie’s thing.” Khloe tells her “Don’t double book!” Kim tells her “It just makes me more empathetic toward mom. I think she needs a team.” Khloe agrees. Scott arrannges a day at a day at a daycare so that he can get hands on experience with real, live children. At first Rob appears a bit overwhelmed, but eventually he finds his way around with the kids. Scott says “Rob has a big heart for kids and he can learn the other stuff.”

The girls are hanging out. All of a sudden all of their phones start going off. They see that Rob and Chyna are fighting. Kim calls Chyna to try and figure out what is going on. Chyna tells her “It’s fine. Make this party all about him. I am having my other shower anyway.” Everyone thinks this is a great idea.

On the day of the shower Rob calls and tells them “I’m not coming to the shower.” Khloe is frustrated. She says “I’m over it. We try to do something nice for Rob and Chyna and this is what they do.” A few days later Rob calls Khloe and apologizes for missing the shower. He tells her “I am so, sorry that I messed everything up for the baby shower. If you could all go outside there is a surprise waiting for you.” When everyone steps outside there are balloons in the backyard.

The next day everyone heads over to Khloe’s to have Rob and Chyna open their gifts. Kris gives Rob his baby bunting to bring her home in. Khloe asks him “Why weren’t you at the baby shower?” Rob says “I made a mistake and thought you guys were trying to be shady and leave her out. It was my mistake.” Everyone is happy and sharing a good time.