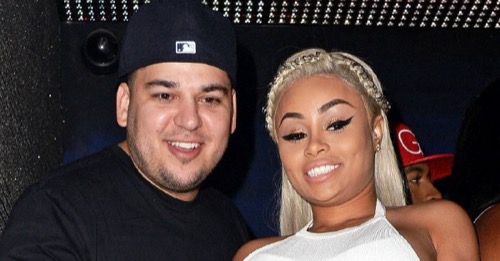 Tonight E!’s most-watched series Keeping Up With The Kardashians (KUWTK) returns with an all-new Sunday, September 4, 2016, episode.  On tonight’s summer finale called, “Love at First Fight,” Rob & Chyna get into an explosive fight and the Kardashian sisters try to smooth things over with the couple.

If you missed last week’s episode of KUWTK where Kris Jenner encouraged son Rob Kardashian to reconnect with his sisters we have a full and detailed Keeping Up With The Kardashians recap, right here!

On tonight’s episode as per the E! synopsis, “Kourtney Kardashian is not thrilled about going on a press trip without her siblings.  The whole family rallies around Khloe Kardashian to help her break her streak of bad birthdays & more!”

With the Kardashian sisters trying to fix Rob Kardashian & Chyna Blac’s relationship you just know it is going to be another crazy episode that you won’t want to miss. Be sure to tune in for our  coverage of E!’s “Keeping Up With The Kardashians” tonight at 9PM EST! Meanwhile, while you wait for our Keeping Up with the Kardashians recap head over and check out all our KUWTK news, spoilers & more, right here!

On this week’s episode of Keeping Up with The Kardashians Scott, Khloe and Kendall are talking about what to do for Khloe’s birthday. Khloe is not looking forward to celebrating her birthday. She says “There always seems to be a dark cloud hanging over my birthday.” Khloe tells her sister and Scott “I don’t really want to do anything for my birthday this year.”

Later that day Jonathon, Kourtney, and Khloe are hanging out. Kourtney is talking about how nervous she is to present her new skin care line by herself. She says “I am used to doing this type of stuff with Kim and Khloe and to do it by myself makes me extremely nervous.” Jonathan tells her “If you need any help I will come out of PR retirement and help you with practice answering questions.” Kourtney thanks him and says “I would really appreciate it.”

Scott, Khloe and Kendall then go out and have dinner. While they are out Scott reveals to the sisters that Rob has had a fight with China and moved out of her house. This worries Khloe, who is afraid that Rob will withdraw and  shut down from the family if the relationship with China fails. She says “I am so glad that my brother is happy and I told him that it was up to him to bring China around so all of us can get to know her.” After hearing the news she calls Rob to check and see how he is doing. He confirms what Scott has told her, that he has moved out of the house. Khloe tells him “You just have to be there for her and love and support her.” Rob tells his sister “I’ve been doing that. I have done everything she has asked me to do. I don’t know what else to do.”

Jonathan meets with Kourtney to work on her interview skills. He tells her “I am going to ask you questions on the fly. I used to do this with Kim. Remember that your sisters won’t be here.” Kourtney nods and they begin practicing. She is still very nervous and does not do very well. She says “I know Jonathan is trying to help, but he is just making me more nervous.”

Kris, Kendall and Scott are discussing Khloe’s birthday party. Kris asks them “What are we going to do for Khloe’s birthday?” Kendall says “She seems so down. She doesn’t want to do anything for her birthday.” Kris says “Khloe is so thoughtful and she does stuff for everyone else and she has had such a tough year we have to do something special for her.” Scott says “Let’s throw her a foam party.” Kendall thinks it is a great idea. Kris asks “Will everyone be doing Jello shots?” Scott says “No. They can wrestle in Jello and foam.” Kris likes the idea and thinks Khloe will have a blast…

Kris meets up with Kim and Khloe to talk about the situation with Rob. They are sitting down and Kris tells the girls “China contacted me and she asked me if she could talk to me.” Khloe tells them “I know that Rob has moved back into his house.” Kim seems stunned. Khloe once again voiced her concerns that Rob will retreat and disappear.

The sisters meet up to discuss the situation with their brother as well. Khloe tells them “I told him that it was good that China made him happy and want to do things, but he had some issues he needs to deal with. I also told him that all relationships have fights and he needs to learn a healthy way to cope. Now China is calling mom and telling her that Rob is sleeping all day and that he is not motivated to do anything.” Kim and Kendall look concerned. Kim says “I want Rob to know that we are here for him and that we care about what’s going on with him.” The sisters decide to try and call him and when they do the call goes straight to voicemail.

Kylie and Kim show up at Rob’s house, but he is not there so they leave him a note asking him to call them. Kim tells her  “I called China to let her know that we were there for her. She told me that she used to think it was all you guys because that was how he made it seem. Now I understand that you guys were trying to help and that he has some serious issues.”

Kourtney is in London to present her new line. She is still very nervous. As she goes to give her speech her nerves get the better of her and she stumbles. She says “I can’t believe this is happening right now. i just want to crawl away and hide.” She manages to introduce Tanya Burr, the YouTuber of the year despite the stumbles. Then she goes and does her photo shoots. As the interviews progresses, Kourtney becomes more comfortable and confident in her own skin and finds that she likes it.

Kim and Khloe are talking. Kim tells her sister “Maybe if she felt like she was invited to your party she would feel more accepted.” Khloe says “Do you think she would want to come?” Kim says “Yeah I think she would come if she knew you wanted her there.” Kim calls her and Khloe invites her to the party. Khloe says “I am happy that China is coming to my party and I hope now that she is coming Rob will  come to. I want to get to know her and make peace in the family and for all of us to get along.”

Khloe goes to visit Rob and check up on him. Kim is there too and Khloe tells her “You look like Rob paid for you.” Khloe asks him “How are things going?” Rob tells her “Things are better. We are working it out.” Khloe tells him “You have to work it out for yourself and now your baby.” Rob tells her “I know. I don’t want to have a kid and not be with the person.” Khloe is impressed. She asks him “What are you doing on Monday? Are you coming to my birthday party?” Rob says “I don’t know.” Khloe tells him “I invited China.” Rob seems happy to  hear that. He says “That might make me come. It is always nicer to be there with someone.”

The night of the party everyone arrives at Dave & Buster’s for Khloe’s birthday party. Khloe says “I chose Dave & Buster’s because it is a great place and they serve alcohol, but I had no idea how huge this place was. I hope everyone shows up.” Kris is there greeting everyone as they arrive. She says “I want this night to be special for Khloe and it would really mean a lot to her if Rob showed up so I hope he does.” Everyone is having a great time. Suddenly Rob shows up and everyone is happy and excited. Kris says “There is always such a sadness when there is a special family day and Rob is not here. Today we don’t have that sadness.” Khloe says “I am so grateful to China for coming because this is intimidating. Without her being here I don’t think Rob would have come.”  Khloe says “This has been the best birthday i have had in a long time. I hope that all of my birthdays from now on can be this good.”