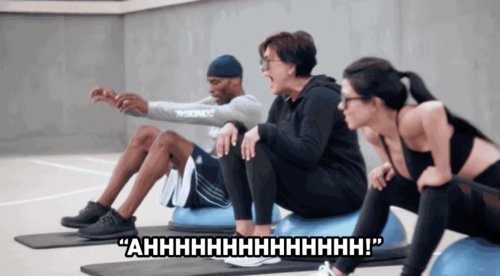 On the last episode, peace was short-lived in the Kardashian family after Chyna launched an app that Rob’s relatives found questionable. Did you watch last week’s episode? If you missed it, we have a full and detailed Keeping Up With The Kardashians recap right here for you.

On tonight’s episode per the E! synopsis “when Kris sees Khloé struggling, she urges Rob to reconnect with his sister; Kourtney worries about giving Scott mixed messages; Kris pushes herself too far in order to keep up with her daughters’ workouts.”

On this week’s episode of Keeping Up With the Kardashians, Kris is meeting Scott and her granddaughter Penelope for lunch. She tells him “I had the craziest appointment with my Dr. today.” Scott tells her “You do more than most people in their thirties.” Kris tells him “There is no reason for being twenty pounds overweight.”  Scott tells her “You aren’t twenty pounds overweight.” Kris thanks him and then tells him about a test that the Dr. wants to do on her poop. Scott is pretty grossed out by this. He tells her “I try to pretend girls don’t poop.”

After he leaves lunch with Kris he goes to see Khloe. Scott asks her “Did you know it was my birthday this weekend?” Khloe tells him “Yes I did.” He asks her “Are you going to be there now that Kourtney and I are not together?” Khloe says “Of course I will.” He tells her “I want to have a family dinner at NoBu before we leave for Vegas.” Khloe says “Wow my schedule is really filling up.”

Khloe and Kourtney are talking. Khloe tells her “I just called Elizabeth to make sure that I still have the ability to make Lamar’s health decisions in case he becomes incapacitated because he doesn’t have anyone he can trust.” She also says “Even though we are getting aa divorce we still care about each other. I just have to move on with the rest of my life.”

Khloe shows up at Kris’ house. Kourtney is already there. Khloe asks Kourtney “Are you going to Scott’s birthday?” Kourtney says “I don’t know. I’ll have to decide on the spur of the moment because Scott takes anything without the kids to mean that we are getting back together and we are so far from there right now.”

Kris talks to Khloe and asks her “Have you talked to Rob lately?” Khloe says “No. I texted him and he doesn’t have time to talk to me anymore.” Khloe says “It’s hard not having him to talk to right now. I have my sisters and no matter how busy or in love we are we always make time for each other.”

Kim and Khloe are hanging out and the news about Khloe’s divorce from Lamar breaks on social media. Kim asks her “How do you feel:?” Khloe says “Don’t act like you care, No one cares but me.” Kim says “It’s not that we don’t care.” Khloe says “I don’t need anyone to care.”

At Scott’s birthday lunch he is very impressed that Khloe is there. He says “With everything that she is going through for Khloe to pull herself together and come out to celebrate my birthday shows me what  a strong woman she really is.” Kris is there along with Kim and Kourtney. Khloe asks “Did you invite Rob?” Scott says “Yeah. He says that because of China he can’t come.  Khloe looks majorly pissed off.

Kim and Kourtney are hanging out . Kim says “I feel bad because Khloe thinks that we don’t care about her.” Kim says “I think that you should really consider going to Vegas because Khloe really wants to go.” Kourtney feels conflicted. She says “I want Khloe to have a fun time and know that we care about her, but I don’t want to lead Scott on or give him any ideas about us getting back together.”

Everyone, including Kourtney, is meeting at the airport to head for Vegas.  When they are in the air Scott asks Kourtney “If this plane was going down could we make out or have sex?” Kourtney tells him “Nope.” Scott asks her “Even if it was your last shot at anything?” She shakes her head. When they get there everyone heads down to dinner and they are all a little uptight. Scott looks to Khloe to be the life of the party. Scott says “You need to do something to liven things up.”  Kourtney asks him “What do you want us to do, dance on the tables?” Scott says “This is one sad table. Should we go to the club or something?” The group heads to the club and they all have a great time dancing and just having fun.

Kris meets with Rob. She tells him “You were Khloe’s best friend and she misses you.” Rob tells her “I doubt I am Khloe’s best friend.” Kris says you are.” She also tells him “ I get that you are in a new relationship but that doesn’t mean that you can’t be close to us.” He tells his mom “You haven’t been that welcoming of this new relationship so it isn’t like we can all hangout.” Kris tells him “You need to make the first move and reach out to your sister.”

Rob calls Khloe and she is so excited to hear from him. He tells her “I just wanted to reach out to you and see if you wanted to see me.” Khloe says “When do you want to see me?” He tells her “Maybe sometime this week.” Khloe tells him “There is no reason to avoid me.”

Kim and Kourtney plan a special pampering afternoon for Khloe.  They are all wearing matching pajamas. Khloe wonders what is going on when she shows up. Kim tells her “We just want you to know how much we love and appreciate you.” Khloe says “I don’t know where I’d be without my sisters and the fact that they planned this for me shows that they know what I’m going through and that they care.”

Rob goes to Khloe’s house. The meeting starts out a bit tense. She is happy to see him, but it seems as though he is a bit uncomfortable being there. Khloe tells Rob “I missed you.”  Rob won’t even look up at her. He tells her “I feel like the situation is going to be weird for her being around because of things that have happened. “ Khloe says “It should be natural and it will be the more you bring her around.”  Rob tells her “I want to  be there for you.” This makes Khloe happy. She tells him “Those months not talking to you were weird. I need you now.” Rob tells her “I’m here and I love you.”