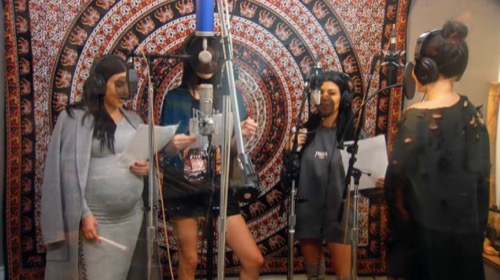 Keeping Up With The Kardashians returns tonight with an all new Sunday January 31, season 11 episode 11, called “The Great Kris” and we have your weekly recap below. On tonight’s episode, Kim Kardashain leads the planning for a grand 60th birthday party for Kris Jenner but is afraid she may have taken on too much at nine months pregnant.

On the last episode, Kris signed herself and the girls up for communication therapy in hopes of putting an end to their continuous bickering, but her plan backfired when she missed one of the sessions. Meanwhile, Kylie felt her family’s bossy ways were getting in the way of her new home celebration; and Khloé struggled to finish her book in the face of so many work commitments. Did you watch last week’s episode? If you missed it, we have a full and detailed recap right here for you.

On tonight’s episode per the E! synopsis “Kim leads the planning for a grand 60th birthday party for Kris but is afraid she may have taken on too much at nine months pregnant; Scott finally goes into rehab, but only time will tell if he is ready to change.”

This week on Keeping Up with the Kardashians Kim meets up with Khloe and they discuss how overwhelmed Kim is with the pregnancy and Khloe says that she wants to be there for her to help because pregnancy is so hard.

Kris shows up for her friend’s podcast and she discusses her 60th birthday and the fact that her kids have been planning something but won’t tell her what it is. They discuss her relationship with Corey and whether or not Kris could be pregnant. Kris says “absolutely not because six is enough.”

The sisters get together to plan their mom’s 60th birthday party and talk about ideas for the party and redesigning Kris’ bathroom.

Corey has completely redesigned Kris’ car with the help of West Coast Customs and it looks like a totally new car. Kris is in shock when she sees it and is completely unaccustomed to people doing nice things for her. She is genuinely happy and excited about the gift that her man has given her though.

Kim goes to see a specialist about her pregnancy because of her past issues. She tells the Dr. that her feet and ankles are huge and that she worries about it. The doctor tells her that the baby has long legs and arms and that Kim is healthy.

Kourtney is taking her daughter out to eat when Khloe calls and tells her that the party planning is so much work and that she needs to step up and help because Kim is pregnant. Kourtney says that she will, of course, step up and do what needs to be done.

Corey tells Kris that she needs to relax and stop working so hard because he is worried about her health. While they are talking her assistant walks in and interrupts them. Corey seems frustrated as he asks Kris if she is going to take their conversation seriously.

Khloe, Kim and Kourtney meet up to work on the details of Kris’s party and they are trying to decide on the minor details. The girls decide to redo her “I Love My Friends” video in honor of her 60th birthday. The girls call Kendall and ask her to get Kris’s friends together to help with the video. It seems as though Kendall is distracted though.

The girls discuss Scott and Kendall reveals that he has decided to go to rehab and get help for his drinking problem. Kim says that she hopes that he can get it together and they ask if Kendall is aware that Scott has gone to rehab. Kourtney says that she is.

Two weeks after Lamar Odom was transferred back to LA after being hospitalized in a hospital in Las Vegas. Kris and Kourtney are discussing the fact that Khloe is spending all of her time at Lamar’s bedside. They are all worried about him and Kris says that she believes that having family close by is helping Lamar in his recovery.

Kanye throws a party in Kim’s honor as a surprise for her. At the party Kris is discussing the situation with family friend Allyson and telling her that Khloe has not slept in a week and won’t leave his side. Allyson asked if Lamar knew they were there and Kris told her that he did.

When Kim and Kanye walk everyone starts singing “Happy Birthday to You.” Kim was surprised and happy to see her friends and family and the fact that they were all dressed up like Kim with a baby bump made her feel better. Kris was on the phone with a lawyer to make sure that Lamar has the best defense lawyer on standby. Corey is trying to take care of Kris during the party. Caitlyn shows up and the situation becomes a bit tense. When a theatre worker comes in he directs them to theatre six where they watch footage of Kim’s first pregnancy.

The girls get back to work on their mom’s video. Kendall agrees to meet up with her sisters to lay down the track for the new version of “I Love My Friends” for their mom’s birthday.

Kourtney asks Kim how her visit to Scott’s rehab was. Kim tells her that it was nice and Kim took their children to see Scott. Kourtney tells Kim that Scott sent her an email asking her to come visit him and participate in some of the therapy sessions. She says that she is not ready to see him yet though.

The sisters head into the studio to record the new song. Khloe isn’t there because she is still at the hospital with Lamar and Kim hopes that she won’t be upset that they excluded her because they didn’t want to bother her. The girls listen to the playback of the song and it sounds awful, so they decide that Kim and Kourtney are going to rerecord it without telling anyone and cut Kendall and Kylie out of the track all together.