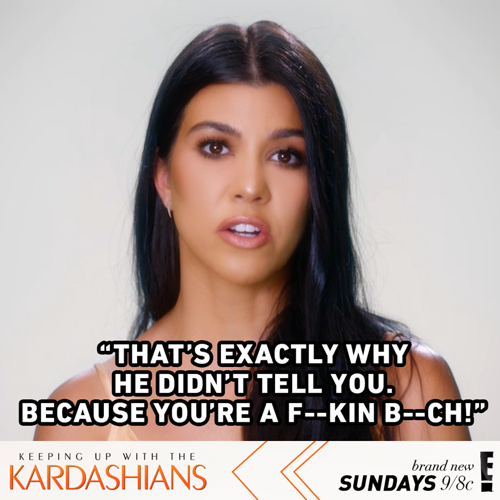 Keeping Up With The Kardashians returns tonight with an all-new Sunday, June 19, season 12 episode 7 called “Snow You Didn’t!” and we have your weekly recap below. On tonight’s episode, Kris Jenner takes her family on a surprise vacation to Vail, Colo.

On the last episode, Khloé had a difficult time moving forward with her divorce and found it even tougher while spending time with Kourtney and Kris in Napa. Did you watch last week’s episode? If you missed it, we have a full and detailed recap right here for you.

On tonight’s episode per the E! synopsis “Kris takes her family on a surprise vacation to Vail, Colo.; and the Ks react to news that Rob has proposed to Blac Chyna. Also: Scott’s behavior concerns Kourtney.”

This week on Keeping Up with the Kardashians Kim, Khloe and Kylie are all hanging out at Khloe’s house. Kim tells Khloe “I see one long, gray hair.” The three sisters then reminisce about how old they are. Kim asks “Is Rob 28?” Khloe says “Who’s Rob?” Kylie says “Good question.” Kim says “I’m happy that Rob is getting out more and he has his life with Chyna, but I can’t help but wonder if he will ever want to hang out with his family again.”

Kris decides to take her family on a surprise trip to Veil. While Kris and Corey are in the car with her mom Kris decides to call Rob and invite him on the trip. Rob asks “Who all is going?” Kris tells him “It’s me Kylie, Kendall, Kim, Kanye and the kids.” Rob is quick to ask “Tyga is not going right?” Kris tells him ” No. Tyga will not be there.”

Kris invites the girls over to her house to inform the girls about the trip to Colorado. While they are there the sisters are taking selfies to post on Snapchar. Kris tlls them “I am planning our family vacation. You have to bring a sweater and a good attitude.” Kylie says “When do we not come with positive attitudes?” Kim asks “Who all is going?” Kris tells her that it will be as many family members as they can get together. Khloe then asks “Is Rob coming?” Kris tells them that Rob will be there. She then informs Kourtney that Scott wanted to know if he could come as well. Kourtney says “I just want to be able to have fun with my sisters without having to babysit someone else.” Kris tells her “I will take responsibility for Scott.” While they have lunch Kris and Kourtney continue to talk about the situation with Scott. Eventually Kourtney agrees that Scott can come. They call Scott and inform him that he is going on their family vacation with them. Kris tells him “You will be staying in a hotel right next door to our hotel, just the way you like it.”

On the day they leave everyone is excited. Scott reveals that Rob isn’t coming on the trip because he is in Kentucky. Kim says “I guess I should’ve expected that my brother wasn’t going to come, but he’s been so good and hanging out that I thought maybe he would come. I feel so bad for my brother. It’s like too bad so sad that you’re missing out. I also feel bad for my mom because of how hard she worked to put this trip together.”

When they get to the hotel everyone is amazed that Kris has put up pictures of their family, including their father. The girls show their kids pictures of their Grandfather. While they are sitting around there is a knock at the door. When Kourtney opens the door they are surprised by Sheila and her family and they have a reunion of the group used to vacation with.

Everyone goes outside and Kim takes her kids to a bridge where she used to play and take pictures. Scott says “I think the one thing I want to get out of this trip is that we can go places together even though we are not together or dating.”

The family heads out on to the slopes to go skiing. Scott and Kourtney decide to watch the kids for a bit before skiing themselves. Kanye and North are making angels in the snow and everyone is having a great time on the slopes.

Later that day everyone is heading to Sweet Basil’s for dinner. Kylie asks Kourtney “Where’s Scott?” She tells her sister “He’s coming.” Just then he walks around the corner and they all head off to the restaurant. While they are having dinner Rob calls them to check in. The family stops and everyone gets their favorite desserts. Kourtney and Kourtney are talking and Kourtney asks her “Have you spoken to Kylie or Kendall?” Khloe says “No, why?” Khloe tells her “Apparently Tyga is now coming on the trip.” Kendall is not happy when she hears this. She says “Why is he coming? I am worried that Scott will rage with him around. ” Khloe tells her “Everyone is responsible for their own actions. If Scott wants to rage he will do so whether Tyga is around or not.”

Kylie is in the kitchen cooking when there is a knock on the door. Tyga enters and Kylie is excited to see him. She says “I hope there is not tension between him and Kourt.” Tyga decides to address Kendall’s issues with his and Scott’s relationship. Tyga says “I feel like you think I’m a bad guy.” Kourtney says “I just feel like you guys feed off of each other. ” Tyga tells her “I am a friend that he values and cherishes, but at the end of the day Scott is a man who has to make his own choices. I have tried to show him what’s most important.” After they chat Kourtney says “I realized that I couldn’t blame Tyga for all of Scott’s choices.”

The next day Khloe gets a text about Rob proposing to Chyna at her house. They are all very upset and angry that he proposed without telling them. Kim wonders “Is this true? Has my mom seen it? How upset is she going to be?” Khloe is especially upset. She says “My feelings are hurt because he was such a part of me and Lamar. I am upset with the fact that he didn’t even give me a chance.” Kim says “I could care less about what he does.” Kourtney says “He doesn’t tell you guys anything because you are so judgemental and mean.” Khloe says “Hearing about this on social media is really upsetting to me. It is like someone is in his ear telling him to stay away from us.”