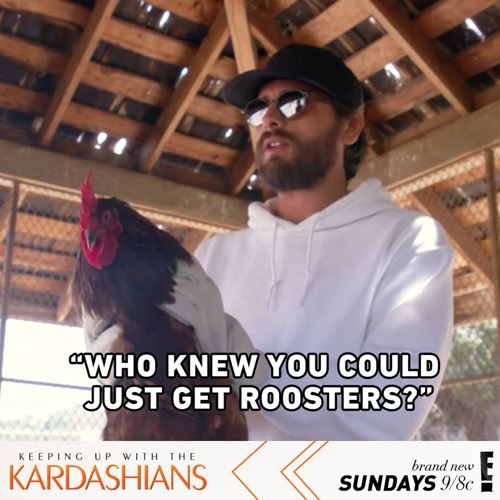 Keeping Up With The Kardashians returns tonight with an all-new Sunday, June 12, season 12 episode 6 called “The Kardashian Curse” and we have your weekly recap below. On tonight’s episode, Khloé Kardashian has a difficult time moving forward with her divorce and finds it even tougher while spending time with Kourtney Kardashian and Kris Jenner in Napa.

On the last episode, Kendall, Kylie, and Khloé got prosthetic makeovers in hopes of having a “normal day out.’ Did you watch last week’s episode? If you missed it, we have a full and detailed recap right here for you.

On tonight’s episode per the E! synopsis “Khloé has a difficult time moving forward with her divorce and finds it even tougher while spending time with Kourtney and Kris in Napa. Meanwhile, Scott goes to great lengths to rid himself of the alleged Kardashian curse.”

On this weeks episode of Keeping Up With The Kardashians KhlNoe goes to visit Scott and French Montana is there. After a brief visit Khloe decides to leave. Scott tells her “Talk to Kourt. We’ll make this a double date.”

Kim and Khloe are talking about her divorce from Lamar. Khloe says “No one cares about how I feel. Everyone is concerned about Lamar, but what about my feelings? I want a real relationship. We are not together so we need to go ahead and get the divorce done.”

Kim’s friend Jonathon is in town. He wants her to go out to dinner with him, but Kim is not interested. She says “I used to make fun of Kourt for only wanting to stay home and be with her kids, but now I understand it.” Jonathon tells her ” You have turned into everything I hate.”

Scott is with his kids and Kylie stops by. Scott asks Kylie “Have you ever been to a Psychic?” Kylie says “No. I have always wanted to go to someone to tell me about my past lives.” Scott tells her “I want to explore the Kardashian curse.” Kylie says “Every man who dates a Kardashian life goes down the drain.”

Jonathon is talking with Scott and Kourtney. He tells her “Kim is really pissing me off. She has turned into the old you.” Kourtney laughs and says “She is a mother. She has gone from one kid to two.” Jonathon says “I don’t care. I’m in town and she needs to pay me some attention. I am thinking about getting a Kim look alike and going out.” Kourtney laughs and says “Do you really think Kim was funny? When has Kim ever been funny. I have always been the funny one.”

Kris is talking to Kim about Khloe’s situation. She tells her Khloe is seriously stressed out with this whole situation with Lamar because they were in the process of getting a divorce when he got sick. Now she doesn’t want to do anything to make him stressed out so she is staying with him.” Kim agrees. Kris says “I think we need to organize a girls day so t hat she can have some time off and figure things out. She will never do this for herself.”

Kris and Khloe are talking. Khloe wonders if she should do a Make A Wish activity. Kris tells her “You really need to take a break and get away.” She also tells her “I am making plans for us to go to Napa for a day of wine tasting.” Khloe tells her “Ok I think you have had too much diet Snapple.” Kris tells her “Ok whatever I am planning it.”

Jonathon is going ahead with his plan to hire a Kardashian impersonator. He tells Kourtney “I just really want to piss Kim off.” He also tells Kourtney “It sucks that you have so many kids.” For a second Kourtney mishears him and assumes that he thinks he believes that it sucks that she has kids.

Back at Scott’s house the man comes to do Scott’s psychic reading and tells him information that he is already aware of. Scott says “I don’t think you are what we are looking for.” The man tells him “I am a medium.” Scott says “What we wanted was a psychic.” He thanks the man for his time and escorts him out. After he leaves Scott tells Kylie “He was the worst ever!”

Jonathon and the Kim look alike that he hired run into Kim at Epicure. She is shocked when she sees them and asks him “What are you doing here?” Jonathon is just as stunned to see her. He introduces her to the other woman who appears to be extremely uncomfortable. Kim says “I am really upset. Having two kids changes your priorities. I can’t just hang out around town anymore.” She also says “No matter who he finds Jonathon will never be able to replace me.”

Kris, Khloe and Kourtney head out to Napa for the day of wine tasting. The girls are hung over from an event and they are acting extremely silly on the trip. Kourtney says “I think my mom is really into wine in general and Khloe and I just want to explore Napa.” Kris is looking for her sunglasses and Khloe tells her “I’m wearing them.” All of the girls laugh and joke at Kris’ expense.

Scott is getting ready to be released from the “Kardashian Curse.” He asks Kylie to come with him. Kylie doesn’t believe it. When the Psychic does Scott’s card reading she tells him “To answer your question I believe you do have a curse.” Scott feels vindicated. The Psychic then tells him that in order to get rid of the curse he has to work with a live rooster. Scott is a bit freaked out and thinks he will have to kill the rooster. She tells him that he will have set the rooster free then take an herbal bath.

Scott and Benny are out looking for a rooster for the purification ceremony. As Scott is holding the rooster he is startled and nearly drops him. He asks the man if the rooster is a boy or a girl. The man tells him “It’s a boy. All the roosters are boys.”

The ladies are at their last winery of the trip. Kourtney says “We are the last winery but I can tell something is bothering her. She is not as happy as she was yesterday.” While they are at lunch Khloe’s phone rings. It’s Lamar on the other end. She checks to make sure that he is all right and that he has eaten before coming back to the table. Both Kris and Kourtney look concerned. Kris asks her “What’s wrong?” Khloe tells her “I am happy that Lamar is doing well and I want to do everything I can to make sure he is ok. But I also wonder what about me? Why is no one concerned about my well being in all of this.” Khloe tells her mom “I just want my space from Lamar for a minute.” Kris tells her “I don’t want him to lose that connection that he has with us.”

Kim and Kourtney are hanging out together. Kim asks her about Napa. Kourtney tells her “Mom was so drunk, but she was a lot of fun.” Kim tells her about Scott’s buying a rooster to get rid of the curse. Kim says “Scott never wants to take responsibility for his own actions. He always wants to blame his problems on someone else.” Kourtney agrees. While they are sitting there Scott walks in.

Kourtney asks him “Have you been shopping around for a voodoo Dr?” Scott says “Yeah I have been exploring my options.” Kourtney tells him “There is no such thing as a Kardashian curse. I’m offended.” Scott tells her “There are a lot of people who go through this family. You guys don’t think that there is ever anything wrong.” Scott says “It seems like the guys in the family have it especially tough.” Kim admits that they do. Scott says “Maybe I could admit that I got caught up in this whole curse thing and I need to take responsibility for my actions.” They take the kids outside to see the rooster and Scott tells North “You can’t touch the rooster because he is only supposed to have my energy.”

Khloe talks to her mom and tells her “I love Lamar with all my heart and I want the best for him, but don’t you ever think it is a cute surprise to have him come meet us somewhere.” Kris tells her “I understand.” Khloe tells her “This is like some kind of serious snowball effect. I want to move on and have kids some day. I might want to get married again.” Kris tells her “I think Lamar needs us as a family.” Khloe tells her “I will be filing for divorce sometime soon. I don’t love Lamar that way anymore.” Khloe says “I want you guys to still be friends with him. I want you guys to talk to him, but I am not in love with him anymore.” Kris says “I understand what you’re saying. I am going to be more understanding and more respectful of your boundaries.”