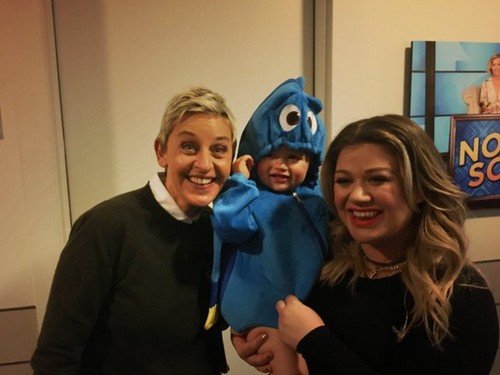 Kelly Clarkson is a mom (again)! Kelly Clarkson gave birth to her second child, Remington Alexander, a healthy baby on Tuesday April 12. The country music singer’s fans were beginning to wonder if the singer had gone in to labor – she was about to give birth at any moment, and has been MIA. Kelly resurfaced on social media on Thursday April 14 and announced that her son was born two days ago.

Kelly Clarkson shared this message on Twitter today, “Our little baby boy has arrived!! Remington Alexander Blackstock was born 4/12/16 & he is healthy & we couldn’t be happier or more in love!”

This is Kelly’s second child with husband Brandon Blackstock, Clarkson gave birth to her beautiful baby girl River Rose in June of 2014. She and her hubby Brandon were married back in 2013. Brandon is well-known in the country music world, not only does he rep Blake Shelton, but he also is Reba McEntire’s step-son. Brandon’s father is Narvel Blackstock, Kelly’s manager!

Kelly Clarkson has always been open about her pregnancies, and her most recent appearance was during the final season of American Idol – the singer and very first Idol winner performed an entire set nearly 9 months pregnant with baby Remington.

And, her pregnancy hormones got the best of her – the singer cried on more than one occasion during her appearance on Idol and blamed it on her growing baby bump. She even sang a song dedicated to her unborn baby boy Remington.

Congratulations to Kelly Clarkson and Brandon Blackstock, we can’t wait to see photos of baby Remington! We are sure he is just as cute as his big sister, River Rose.

Our little baby boy has arrived!! Remington Alexander Blackstock was born 4/12/16 & he is healthy & we couldn’t be happier or more in love!