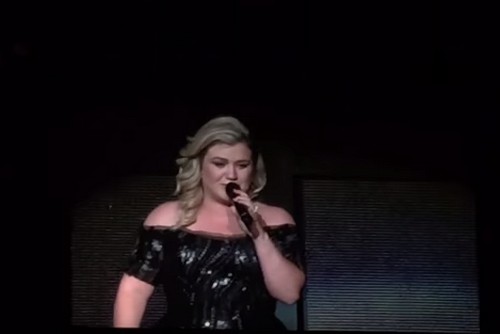 Kelly Clarkson announced to the world during a concert that she is pregnant with baby No. 2 just 14 months after giving birth to daughter River Rose. While performing the beautiful ballad “Piece by Piece” Kelly became over emotional and weepy and had to stop mid song.

At the August 19 concert the singer made the split second decision to announce her pregnancy because she did not want fans to think she was crazy or on drugs. After blurting out the news Kelly Clarkson did apologize to hubby Brandon Blackstock, who was backstage, because it was not the way the couple planned on making the pregnancy announcement. Kelly and Brandon had not even shared the news with most of their family and friends yet. Guess they know now?!

Kelly’s fans went wild with excitement, cheering with happiness for their favorite songstress. Bet they felt special, right? They came to see Kelly in concert and got the bonus of being almost the first to hear the news that she is having another baby.

Knowing full well that once the words came out of her mouth the whole world would know, she said, “I was not planning on announcing this, but I’m totally pregnant!” Kelly said her hormones have been completely out of whack, kind of being like on an emotional rollercoaster every day. But, everything is great, she feels wonderful and she has not vomited yet. “So, that’s a win!” said the singer. Kelly suffered from nearly debilitating morning sickness while pregnant with her daughter. No word yet on when baby No. 2 is due, but most likely sometime in the spring of 2016.

Her mother-in-law – step-mother-in-law – Reba McEntire, and estranged hubby Narvel Blackstock, Brandon’s father, recently made the shocking announcement that they have separated after 26 years of marriage. Reba and Narvel have been living apart for months. On the heels of that bad news it is nice to hear some good news from the Blackstock clan.

Congratulations to Kelly and Brandon! What do you think of Kelly’s spur-of-the moment decision to share their baby news with the world? Was it fair to family and friends that did not know yet? Do you think they will forgive her for sharing the news the way she did?