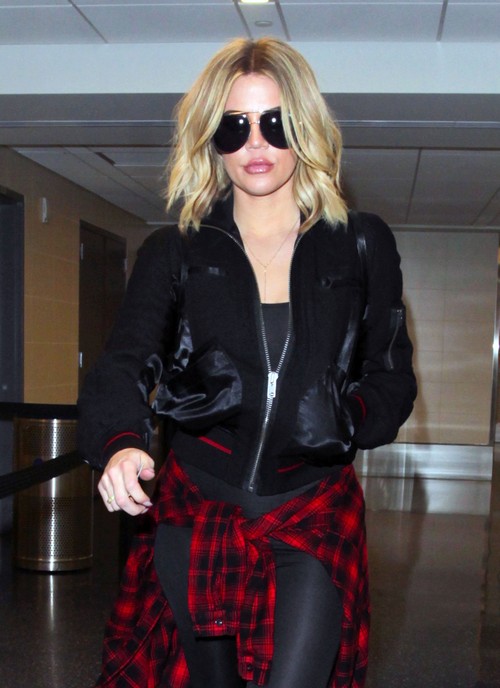 Khloe Kardashian’s latest selfies have fans and critics alike wondering if the reality television star might be going too far in her supposed plastic surgery obsession. In fact, Khloe looks almost unrecognizable in a series of new photos.

Even though the ‘Keeping Up With The Kardashians’ star has long been rumored to have gone under the knife several times because of her ever-changing appearance, fans are worried that she might have gone a little too far this time. Khloe has apparently been doing more than just a little nip and tuck as he facial features are changing so much that she looks nothing like she did when she first appeared on ‘Keeping Up With The Kardashians’ several years ago.

Then again, Khloe Kardashian might have a real reason why she’s been trying to change her appearance in recent weeks and it all has to do with her current boyfriend, Tristan Thompson. Khloe is being accused of being a homewrecker, simply because Tristan is expecting his first child with his ex-girlfriend and baby mama, Jordy.

It’s been rumored that Tristan left pregnant Jordy to be with Khloe as he is simply more attracted to the reality star’s fame and wealth than he is to her. And knowing all too well how the media is going to compare her to someone like Jordy, who just happens to be a model, Khloe has been doing everything it takes to look as sexy and desirable as her love rival.

After years of constantly being called the ‘fat’ and ‘unattractive’ Kardashian, Khloe doesn’t want the media to scrutinize her looks and compare her to someone like Jordy. It will not only devastate and humiliate her, but it might also make her lose Tristan, who might eventually break up with her and go back to his ex, especially since she’s about to give birth to the NBA star’s first child.

Sure, Khloe might want her fans to think that she’s self-confident when comes to accepting herself the way she is, but in reality, that’s far from the truth. That’s why she’s been obsessed with looking as perfect as possible, even though her procedures are not giving her the results she might want.

Tell us, do you think Khloe Kardashian now looks unrecognizable? Is the reality television star obsessed with plastic surgery? Has she gone too far with her treatments? Drop us a line in our comments section. Also, check back with CDL for all the latest news on Khloe Kardashian.

In every lifetime I’m choosing to have you as my sister and best friend! Happy birthday @kendalljenner