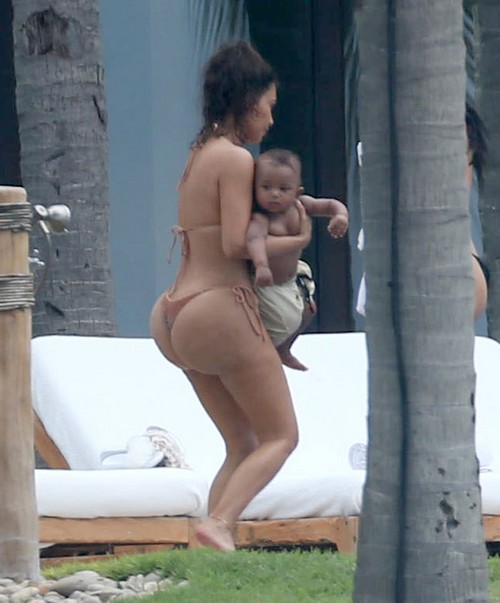 A Kim Kardashian and Kanye West divorce might happen before the end of the year as the couple is clearly spending more and more time apart. In fact, Kim Kardashian might be provoking Kanye West with photos and videos she is posting from her all-girls getaway in Mexico, which also includes a Kim

And that’s probably why Kim Kardashian has happily posed for the paparazzi with her kids during her sun and sand vacation in Mexico. What’s more, Kim Kardashian’s bikini photos have been heating up the Internet as well, as she’s been provocatively posing for the cameras with her children nearby.

Clearly, Kanye West is going to be none too happy when Kim Kardashian comes home along with their children North West and Saint West. Surely, he didn’t expect their Mexico vacation to become a hangout for the paparazzi. And of course, there’s also the matter of Kim Kardashian’s twerking video.

Sure, this is the same woman who became famous thanks to her leaked Kim Kardashian and Ray J sex tape from ten years ago, but this isn’t what Kanye West expected when he married her two years ago. Kim Kardashian is a wife and mother now, and her husband doesn’t want to see her posting naked selfies and twerking videos for the world to see.

If that weren’t enough, Kanye West has long made it clear that he is worried about his family’s safety whenever they are out in public and apparently that has been the last thing on Kim Kardashian’s mind during her Mexican vacation. It almost seems like Kim Kardashian is using her children North West and Saint West for the media publicity that she so desperately craves.

Tell us CDL readers, what do you think? Will a Kim Kardashian and Kanye West divorce happen sooner rather than later? Do you think Kanye West is upset that Kim Kardashian is exposing their family to the paparazzi? Let us know what you think in our comments section below and of course don’t forget to check back with CDL for all the latest updates on the Kardashian family along with all of your favorite celebrities right here.