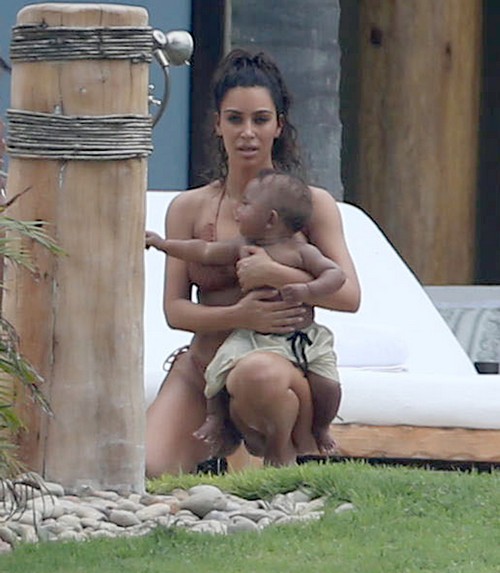 Kim Kardashian has stepped out with her children Saint West and North West while showing off her impressive bikini body in Punta Mita, Mexico. Kim Kardashian’s children looked to be enjoying their one-on-one time with the ‘Keeping Up With The Kardashians’ star, who recently lost 70 pounds after giving birth to Saint West last December.

In fact, Kim Kardashian outing with Saint West and North West comes only a few weeks after the reality television star and Kanye West allegedly fought over their children’s safety. Kanye West was supposedly none too pleased when Kim Kardashian brought Saint West to San Diego for a Kardashian family reunion last month.

The ‘Famous’ rapper was upset that Kim Kardashian exposed her son to the paparazzi and loud crowds whenever he’s not around. What’s more, 3-year-old North West is apparently terrified of photographers while Saint West is still not used to all the flashing lightbulbs and chaos that comes whenever his mother Kim Kardashian is in public.

Yet, it looks like Kim Kardashian has done it again, which will no doubt leave Kanye West furious. The mother-of-two, who leaked her very own sex tape to become the famous celebrity she is today, knows that posing in her bikini on a beach with her two children will give her maximum exposure.

Kanye West might not like it, but Kim Kardashian knows her way around the business and gives the people what they want. Not only do Kim Kardashian’s fans want to see her body – which has helped make her millions of dollars throughout the years – but her children as well.

After all, North West and Saint West have become a Kardashian commodity who will end up growing up with paparazzi cameras following them all their lives. It might not be normal, but it’s part of Kim Kardashian’s “sexy mom” image that she is currently selling.

Tell us CDL readers, what do you think? Is Kim Kardashian using her children North West and Saint West for publicity? Is Kanye West going to be upset that his children are being photographed by the media once again? Take a look at our photo gallery below and let us know what you think in our comments section.

Reality star Kim Kardashian and her kids North and Saint West enjoy a day poolside while on vacation in Puerto Vallarta, Mexico on August 18, 2016. Kim was rocking a very revealing bikini while with her kids. FameFlynet