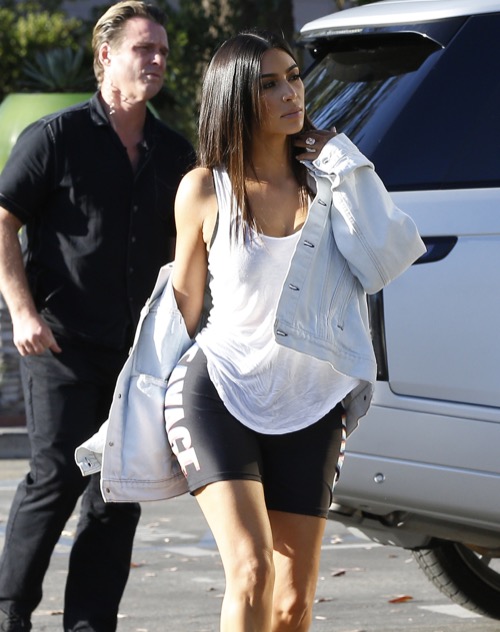 Kim K. announced yesterday via live feed that she has been getting butt injections for years in order to treat psoriasis, a skin disease characterized by red, scaly patches.  Kim has previously discussed having the condition on an early episode of Keeping Up with the Kardashians.

The reality star claims that she first became aware that she suffered from the skin condition when Kris Jenner pointed out a rash on her leg.  After being diagnosed with psoriasis by a doctor, Kim began getting cortisone injections in her butt as treatment.  She continues to periodically receive the injections as part of her ongoing treatment, saying that she recently had one in Vegas.

Despite having a “one in a million chance” according to her doctor, Kim says that the injections caused her to develop an indentation in her butt.  When she was photographed wearing a tight dress in Miami that showed the indent, internet speculation began about whether or not she had received injections or implants in order to further plump up her already ample backside.  Kim Kardashian has adamantly refuted claims that she has had cosmetic enhancements to her derriere.

Kim Kardashian’s cortisone butt injections may be for a valid health reason, but it is not unusual for the star to go to extraordinary lengths to correct perceived bodily imperfections.  According to a February 2016 edition of the Daily Mail, it is estimated that the reality star spent over $100,000 in cosmetic procedures including liposuction, a tummy tuck and laser treatments in order to return to her post-baby body.

Although such procedures are not unusual for celebrities, Kim has denied undergoing any cosmetic procedures.  Perhaps her oddest attempt at chasing youthful beauty was when she received a “vampire facial” on an episode of Keeping Up with the Kardashains.  Otherwise known as platelet rich plasma injections, the procedure involves extracting blood from the patient’s arm, spinning it in a subterfuge to remove the plasma, and then injecting the plasma directly into specific areas of the face.

If a star is willing to go to those lengths to fight wrinkles, it is unlikely that she would cringe at the idea of plumping butt injections but, for now, psoriasis is her official story and she is sticking to it.

What do you think about Kim Kardashian’s butt injections?  Are they really for psoriasis?  Would you ever try an unusual cosmetic procedure like a vampire facial?  Sound off in the comments below!