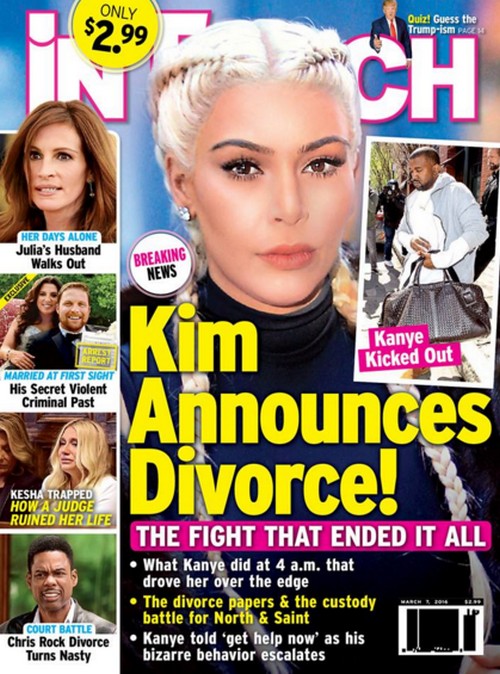 Kim Kardashian’s divorce from Kanye West is really happening – according to this week’s cover of In Touch Magazine. Divorce rumors have plagued Kim and Kanye for months, it’s obvious that their relationship is not what it used to be. And, it turns out Kim Kardashian is just an annoyed with her husband’s erratic and egotistical behavior as the rest of the world.

This week’s cover of In Touch Magazine features a fierce looking Kim – no seriously, she has the “I Mean Business” face, in another photo Kanye West appears to have packed a bag and is moving out.

The headline screams, “Kim Announces Divorce – Kanye Kicked Out!” In Touch’s front page goes on to tease all the details on a fight the couple had at 4:00 AM that ended it all, the divorce papers and custody battle, and Kim ordering Kanye to get help now for his erratic behavior.

What has been interesting about Kanye’s West’s latest downward spiral is that the rapper’s entire breakdown has been pristinely documented across the internet – we have screenshots of his insane Twitter rampages, and there is even the tape of Kanye screaming obscenities and making NO sense behind the scenes at Saturday Night Life.

Not to mention police reports from previous violent altercations in the past few years. Basically, Kanye doesn’t stand a chance at getting custody of North and Saint West. We’re not saying Kim is a good mom, but she is definitely a better looking parent on paper than Kanye West.

Kim and Kanye’s divorce really is a no brainer – we all saw this coming a mile away. There is no way Kim is going to stand by Kanye’s side while he commits career suicide. The reality TV queen is obviously trying to get out while she still can – before Kanye kills both of her careers.

What do you guys think? Will Kanye actually get help – or will Kim have no choice but to file for divorce? Is it wrong of her to abandon Kanye when he obviously needs help, or would you have left already if you were in Kim’s shoes? Let us know what you think in the comments below!