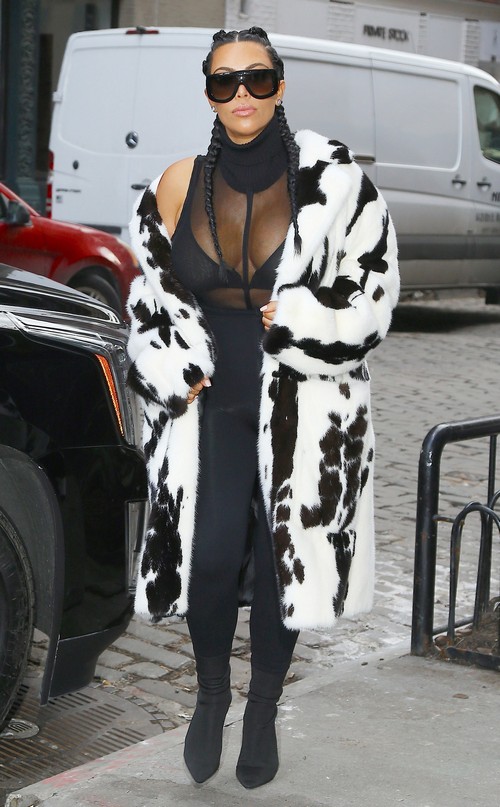 Kim Kardashian stepped out on Wednesday February 10 in New York City to flaunt her post baby body – all by herself. Paparazzi snapped photos the reality TV star wearing a black sheer dress, barely holding in her boobs, with a large black and white animal print coat draped over her.

Kim’s outfit screamed “Please take pictures of me and plaster them all over the Internet.” We’re kind of curious what office building she was entering in the middle of the day that required such an obnoxious ensemble.

It’s no coincidence that Kim Kardashian was solo – earlier this week Kanye West once again embarrassed himself on Twitter by announcing that “Bill Cosby Is Innocent” – and receiving a ton of backlash. Kanye has been on quite the roll since his bizarre Video Music Awards speech in which he announced he was going to be the next black President, to his feud with Wiz Khalifa, and now his public endorsement of Billy Cosby (who has been accused of raping over 50 women).

And, she has been sitting at home a hot jealous mess, most likely starving herself, and counting down the days until she could step back out in public after Saint’s birth – she hated letting her famous sisters have all the limelight while she was out of commission.

So, what do you think of Kim Kardashian’s post-baby body? Do you think she went under the knife to get rid of the baby weight from her pregnancy? Let us know what you think in the comments below!