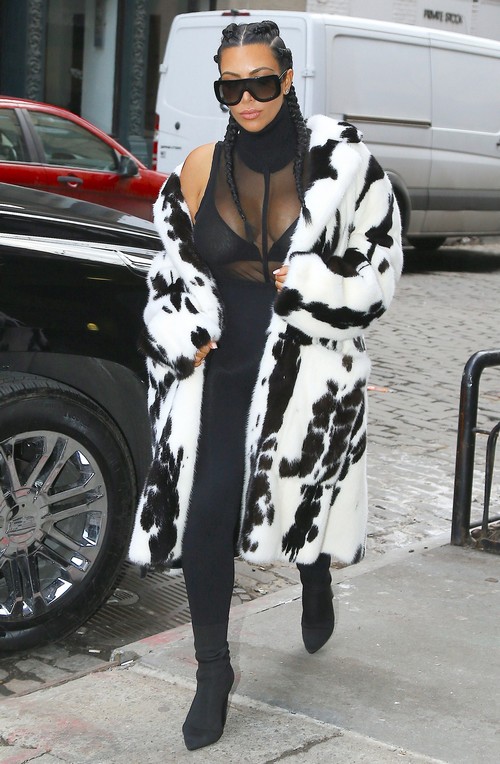 Kim Kardashian’s divorce from Kanye West could actually be a real thing in 2016, especially now that Kanye has publically endorsed alleged rapist Bill Cosby. At the end of the day, Kim Kardashian can turn a blind eye to Kanye West’s supposed cheating, the partying, and the controlling behavior – but there is one thing Kim is NOT having, and that’s her husband Kanye literally destroying her image, alienating her fans, and making a mockery of her family.

Kanye West has gotten stranger and stranger since his marriage to Kim Kardashian. We always knew he was a bit of an oddball – the problem is that now he is an oddball and an attention seeker. He used to just be a weird little oddball that brooded in the corner and didn’t speak unless he had to. Now, he’s letting his crazy flag fly – and making Kim Kardashian look like a fool.

Kanye West took to Twitter this week (seriously, can’t someone just change his password on him) and announced that “Bill Cosby Is Innocent.” Kanye’s tweet garnered a few supporters and a whole lot of criticism.

Even some celebrities took to Twitter to remind Kanye that over 50 women have come forward and accused Bill of rape in sworn testimony. Tyler Oakley hit the nail on the head and informed Kanye that this was NOT the way to promote his new album.

Obviously Kim is mortified (as is the rest of the Kardashians) that Kanye would publically support a man that was accused of raping over 50 women. Whether he is just trying to stir up drama to promote his new album, or he honestly is Team Cosby – it is not a good look for their brand.

When Kim Kardashian married Kanye and they became “Kimye,” they were unstoppable together and worth a pretty penny. Now, Kanye is becoming a liability and slowly sinking the ship. If Kim wants to save herself and her brand, she needs to cut ties with her Bill Cosby supporting hubby ASAP.

What do you guys think? Does Kanye West actually believe Bill Cosby is innocent? Or is he just trying to stir up drama and create a buzz for his new album? Will Kim actually divorce Kanye if he doesn’t calm down and stop making her look like a fool? Let us know what you think in the comments below!

Reality star Kim Kardashian was spotted heading to an office building New York on February 10, 2016. Kim shows off her post baby body in a sheer dress while she was out, by FameFlynet