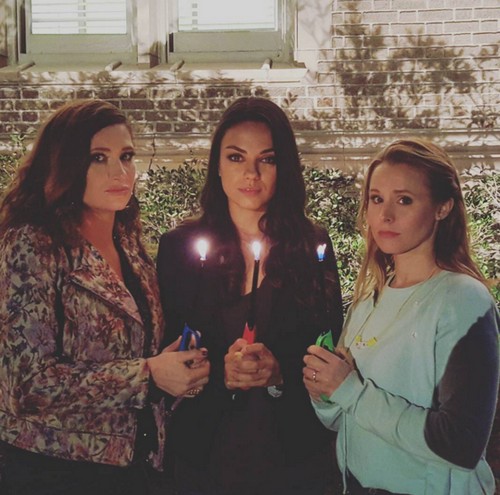 Mila Kunis and Kristen Bell decided to hold a vigil for crazy Kanye West. Maybe Mila and Kristen, who were joined by Kathryn Hahn, are praying for Kim Kardashian, too. The “KUWTK” star is reportedly refusing to have a third baby with Kanye, and that’s probably not a good thing.

Kristen Bell and Mila Kunis decided to have some fun at the rapper’s expense. Kristen posted a hilarious pic on Instagram. Check it out – Bell, Kunis and Hahn, who are currently filming “Bad Moms,” are holding lighters you use to light a grill or maybe a stove. The photo is captioned “On set and #prayingforkanyne #BADMOMS #MilaKunis #katherynhahn.”

Yeezy loves to entertain and that’s exactly what Kim Kardashian’s husband has been doing for months. The crazy train left the station – again – at the VMAs when an obviously, shall we say baked, Kanye went on a nearly 15 minute rant and then announced he was running for president in 2020.

Next up on Kanye’s list of insane things to do during the shortest month of the year? Declare he’s $53M in debt and needs Facebook founder Mark Zuckerberg to bail him out!

Of course we cannot forget West’s new song “Famous” in which the rapper says maybe he’ll still sex with Taylor Swift because Kanye made that b**** famous!! But T-Swift got her digs in at the Grammys! Never cross Taylor because the singer will send the Swift Squad after you!

To wrap things up, last week Kanye went OFF backstage at “Saturday Night Live” and complained when the SNL production team changed the set at the last minute.

The NSFW rant was never meant to be heard by the public. But someone leaked it and Yeezy can be heard yelling, “Now I’m bummed. That and Taylor Swift. Fake a**. Now I ain’t gonna do this. We’re breaking the [insert expletive here] Internet!”

It seems as if Kanye West has calmed down. TMZ caught the rapper on video helping end a near fist-fight between two members of the paparazzi. In the complete chaos of overlapping questions and paps pushing cameras in his face, Kanye inserted himself between two photographers and hugged one of the dudes until everything calmed down.

It does appear Kim Kardashian is fed up with Kanye West and will not get pregnant again. We’re not saying Kardashian will NEVER have another baby with Kanye, but right now there is no way Kim is bringing another West child into the world.

Kim Kardashian hasn’t even lost the baby weight gained while pregnant with Saint West. The “Keeping Up with the Kardashians” star needs a break both from baby-making and Kanye’s outbursts of madness.

Let us know what you think in the comments section below and come back to CDL for the latest Kim Kardashian news.