Kim Kardashian wears Blond Wig to Look Like Taylor Swift: Hopes Kanye West Will Want Her Instead of ‘Famous’ T-Swift 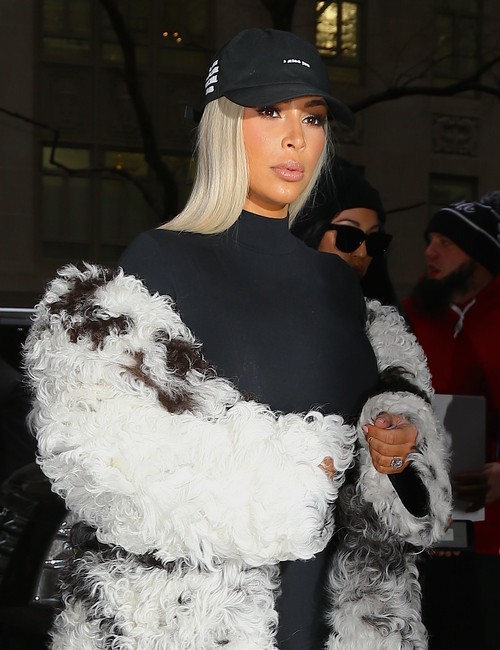 Kim Kardashian wore a blond wig while traipsing around NYC during Fashion Week. Is Kim Kardashian trying to look like Taylor Swift so that Kanye West will want her instead of T-Swift?

Honestly, how ridiculous does Kim look with the wig? But after Kanye’s explosive new song “Famous” and the now infamous line “I feel like me and Taylor might have sex. Why? I made that b**** famous” maybe Kardashian is afraid Kanye will, or already has, been hitting the sheets with Swift. Hence, the T-Swift-like wig.

As if Kim could ever look like Taylor! After all, Kardashian’s got curves and the ample assets and T-Swift doesn’t – totally different body types. Kayne may be sleeping with a blond, but the body is still Kim’s not Taylor’s.

Yeezy is back to being controversial and the Swift Squad isn’t going to let Kanye get away with it this time. Taylor has besties Gigi Hadid, Jaime King and Selena Gomez on her side. The Swift Squad was quick to show their support for Taylor.

Who does Kanye West have on his side? A blond wig-wearing Kim Kardashian, and maybe Kourtney Kardashian, Khloe Kardashian and Kris Jenner.

We’re guessing Rob Kardashian won’t be supporting Kanye in this battle. But, you never know. Even though Yeezy’s truce with Taylor didn’t last long, the I love you, you love me fest with Amber Rose and Blac Chyna seems to have lasted.

This isn’t the first time Kim has gone blond, at least this time it’s a wig! If Kanye really likes Kim with lighter locks the “Keeping Up with the Kardashians” star just may change her hair color again. But is it because Kim Kardashian is afraid Kanye West wants Taylor Swift or is it just Kardashian messing around and experimenting with a new look.

Don’t forget – Kanye is going to run for president in 2020! We wonder if “Famous” will be his theme song during the campaign!

Let us know what you think in the comments section below and come back to CDL for the latest Kim Kardashian celebrity news.

Kim Kardashian is spotted out and about with friends on February 12, 2016 in New York City, New York. Kim is currently in town enjoying New York Fashion Week with her husband Kanye West by FameFlynet