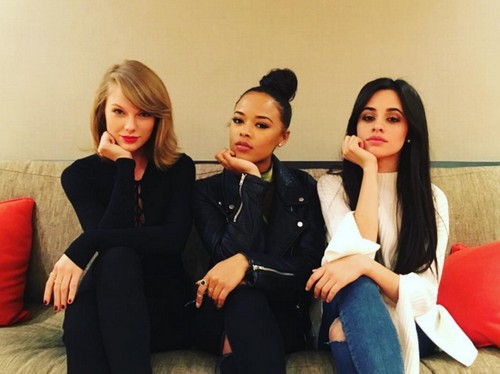 The “Bad Blood” between Kanye West and Taylor Swift is BACK! Kanye may be in a bit over his head this time around though – because Taylor Swift’s squad of famous BFF’s is basically declaring war on Yeezy. Just a few months ago T-Swift and Kanye famously buried the hatchet at the Video Music Awards, after years of throwing shade at each other after Kanye botched Taylor’s 2009 Grammy Award speech.

Their truce didn’t last for long though. On February 11th Kanye performed his new single “Famous” off the album “The Life Of Pablo” and concert-goers were stunned when West rapped, “I feel like me and Taylor might have sex. Why? I made that bitch famous.”

No one was too impressed with Kanye’s latest rant against Taylor – especially her BFF’s who took to social media to let Kanye know that what he said wasn’t cool, and he basically just declared war on T-Swift’s Girl Squad (honestly – we think they could take Ye).

Gigi Hadid, Jaime King, Selena Gomez all took to social media to let it be known that they are Team Taylor. Gigi was actually at the Kanye West show when he was rapping about having sex with her best-friend and “making her famous.”

Hadid sent out this tweet, “My attendance somewhere does not mean I agree with everything being said in the music playing there. My friends know of my loyalty.” Jaime King made a similar statement about how disappointed she was in Kanye West. And, Tay’s brother actually shared a video of himself throwing his Yeezy sneakers in the trash – which Selena Gomez clicked “like” on.

Kanye West is pulling out all the stops to promote his new album – and dissing Taylor and rapping about having sex with her is obviously a publicity ploy. But, Kanye may have bit off a bit more than he can chew.

Taylor Swift obviously has a LOT more friends than Kanye West does – and at this rate, he is going to be blacklisted and shunned at every event from the East Coast to the West Coast. Taylor’s mean girl clique is going to chew up Ye and spit him out.

Are your Team Taylor? Or do you think she and her pals are over-reacting over the lyrics in Kanye’s song? How will Taylor Swift retaliate? Share your thoughts in the comments below!