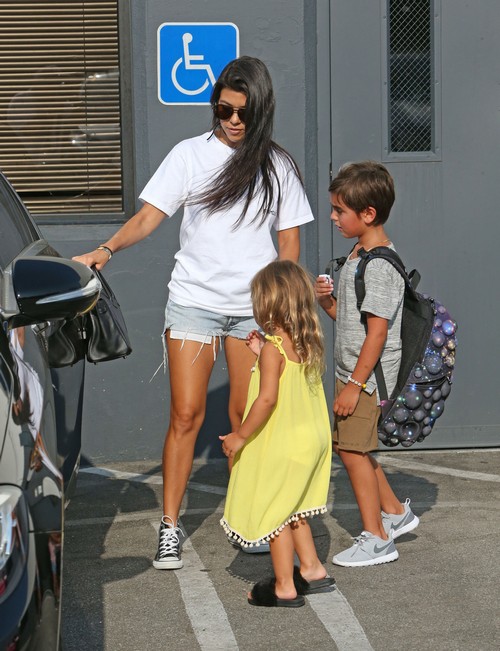 Apparently Kourtney Kardashian is no different than the rest of the Kardashian’s as Kim Kardashian’s older sister was spotted wearing a Kanye West t-shirt while she was out and about this past weekend. Whenever the Kardashians step out in public, there’s a good chance that they are doing so with a message to the media.

Kourtney Kardashian, who is often seen taking care of her family on her own, took her children to a birthday party at Sky High Sports in the Woodland Hills area of Los Angeles on Saturday. While her on-again, off-again partner of several years Scott Disick was nowhere to be seen, Kourtney Kardashian wore a Kanye West concert t-shirt to the trampoline park while doing her best to mingle with the other adults at the party.

While there’s no doubt that Kourtney Kardashian is a hands-on mother who does her best to avoid all of the drama that circulates in the Kardashian, one thing is for certain: she’s got more dedication to her kids and her family than Scott Disick has ever shown in his lifetime.

While Kourtney Kardashian is busy taking the ex-couple’s three children, Mason, Penelope and Reign to social events like birthday parties or simple play dates at the park, Scott Disick is often no where to be seen. In fact, that might be one of the reasons why Kourtney Kardashian and Scott Disick have had so much friction in their often-tumultuous history together.

Kourtney Kardashian almost looks like a single mother in the public eye while Scott Disick can’t get his life together while partying in Las Vegas clubs and drinking to no end.

That’s also probably why Kourtney Kardashian feels so torn between wanting to bring Scott Discik back into her life and kick him out for good. Even though Scott Disick is rumored that have spent time with Kourtney and the kids in Cape Cod, it doesn’t look like the ex-couple has rekindled their romance in any way, shape or form.

If that were the case, there’s no doubt that Scott Disick would be attached to Kourtney Kardashian at the hip, especially if they were romantically involved again.

Yet, Kourtney Kardashian’s brother-in-law Kanye West looks like a totally different father and partner in comparison. While Kim Kardashian has long been criticized for her parenting skills, Kanye West is often seen carrying his daughter North West or pushing his son Saint West’s stroller.

The rapper is almost always two steps behind Kim Kardashian while keeping a watchful eye on his family, which is something that Scott Disick has never really done. So it’s no wonder that Kourtney Kardashian is such a big fan of Kanye West and even wear a t-shirt in his honor to prove it.

Take a look at our photo gallery and tell us CDL readers, do you think Kourtney Kardashian is willing to take Scott Disick back in her life even though he’s not always ‘present’ with their family? Should Scott Disick step it up in the fatherhood department? Let us know in the comments section!

Kanye West and Kourtney Kardashian seen taking their children to a birthday party at Sky High Sports in the Woodland Hills area of Los Angeles on July 30, 2016. Kourtney was wearing a Kanye concert t-shirt at the trampoline park. FameFlynet