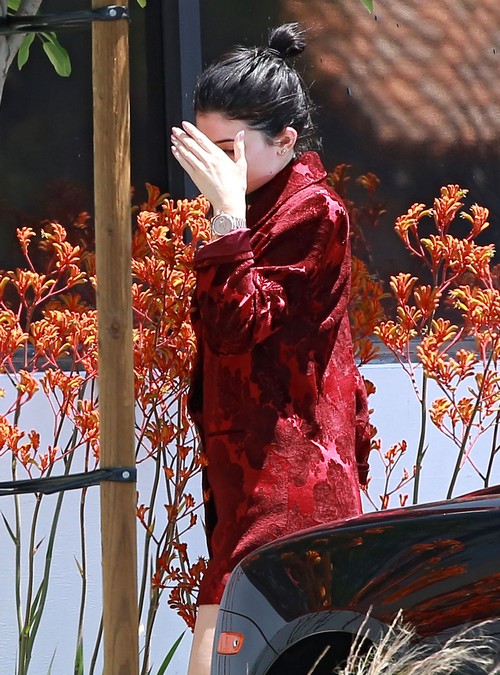 Kylie Jenner and Tyga have split – and it looks like this beak-up is the real deal. Obviously this isn’t the first time that Tyga and Kylie have “broken up,” but according to sources – there is “no going back this time.”

It became pretty clear there was trouble in paradise (again), when Kylie Jenner and Tyga walked the red carpet separately at the 2016 Met Gala. And there is also a new mystery model in the rapper’s life – he was spotted dining with her and his mother on Mother’s Day.

As for why Tyga and Kylie Jenner have split – it’s pretty much anyone’s guess, but were going to assume it has something to do with his baby-mama drama and Kylie’s future sister-in-law. Let’s be honest, with all of the bad blood between Tyga and Blac Chyna – there really is only room for one of them in the Kardashian Family.

Seeing as how Blac Chyna is pregnant and planning her wedding – it makes sense that Tyga had to go.

Also, now the selfie that Chyna and Kylie Jenner shared makes a little bit more sense. Everyone was baffled, trying to make sense of how Kylie was suddenly besties with her boyfriend’s baby-mama and brother Rob Kardashian’s fiance after all of the shade they had been throwing at each other online.

But, if Tyga and Kylie were done, that explains why it was so easy for the two women to let bygones by bygones.

As for Tyga and Kylie post split – Kylie is furious that Tyga is still living the good life and taking advantage of the perks of being her boyfriend, even though he’s not her boyfriend anymore.

TMZ revealed, “We’re told Kylie was bent out of shape that Tyga had the nerve to go to the Met Ball. He was only invited because of her, and she’s mad at herself that she didn’t think to have him made persona non grata.”

This is particularly funny since only a couple of years ago the Kardashians were banned by Vogue’s Anna Wintour from getting anywhere near the Met Gala! This was when America still remembered that the Kardashians have contributed nothing to anything other than the sex tape industry. Unless you count excessive use of cosmetic surgery as a quality. Now all of a sudden Kylie Jenner thinks she is royalty….

So, why do you think Kylie and Tyga broke up? Are they over for good this time? Let us know what you think in the comments below!

Kylie Jenner is seen stopping by a studio in Los Angeles, California on May 11, 2016. Kylie was wearing a red dress to match her red Rolls Royce. FameFlynet