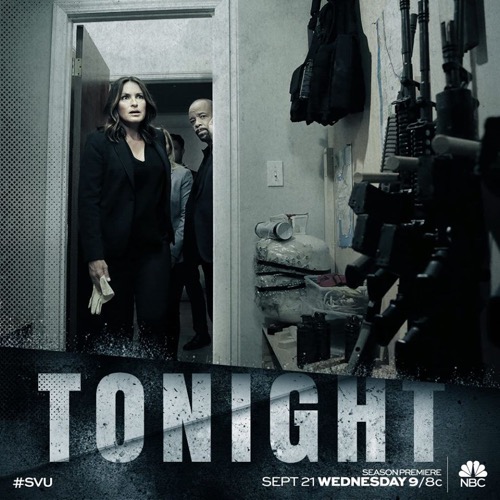 Tonight on NBC Law & Order SVU returns with an all-new Wednesday, September 21, 2016, premiere and we have your Law & Order SVU recap below.  On tonight’s Law & Order SVU season 18 premiere, In the 18th-season opener, a child is discovered wandering alone in Central Park, and the search for his parents leads to clues about a planned mass-casualty event in New York City.

Did you watch the season 17 finale where lives were threatened when the detectives and ADA Barba (Raúl Esparza) intensify their investigation of a corrections officer accused of rape? If you missed it we have a full and detailed Law & Order SVU recap, right here.

On tonight’s Law & Order Season 18 premiere as per the NBC synopsis, “A young boy is found wandering alone in Central Park and the search for his parents leads to startling evidence of a planned mass casualty event in the city. As the SVU works with the joint-terrorism task force to find the suspects and the motive, Lt. Benson (Mariska Hargitay) must also convince Barba (Raul Esparza) to address allegations of rape and torture the boy’s mother discloses”

Lieutenant Olivia Benson was at the park with her young son Noah when she noticed that there was another little boy at the park and that he seemed to have been left unattended. So Olivia had gone over to the child to see if there was anything wrong and if there was someone watching him. However, she had barely said hello when the child drew a gun on her. The gun had apparently been in the sandbox just lying next to the child and so Olivia barely had time react much less shield her son before she was facing a child that didn’t appear to know a lot of English yet who knew how to cock a gun.

Yet, fortunately, Olivia and later the beat cops that had been on the scene had been able to talk the child down. So the little boy had been taken into custody and, to make sure he was all right, they had also had him checked over by a doctor. The doctor though had no easier time trying to communicate with the child. The little boy’s language sounded Russian if not Eastern European so no one was able to communicate with the little boy or ask him where he got the gun until they got a translator down to talk to him. And the only other person that could possibly help them with the child had been killed in some kind of freak bike accident.

The child it seems had gone to the park with an older woman that might have been grandmother or relative of some sort because they had found kid stuff in her bag. But, while she hadn’t been able to tell them the police herself who she or the child was, she did have ID on her and the police later managed to find out the boy’s name at her apartment. The boy’s name was Ali and Rahima Babic had been his grand-aunt. His mother on the other hand, had disappeared because there had also been a goodbye letter from her for Ali at the apartment.

So Olivia had fought to stay on this case. She had been advised to pass it along to someone else’s division but had wanted to stay on because she had wanted to find out how Ali got his hands on a gun. However, there weren’t a lot of people that knew anything about him or his family. Their landlord had merely called them foreigners as if his own ancestors hadn’t once used a boat to get here (something that Finn called him out on) and one person that thought Ana was being abused by the guy she was always around. And so they followed up that lead about Ana having a boyfriend and the boyfriend turned out to be her fiancée.

The fiancée’s name was Luka Terzik and Olivia with her people had gone to Luka’s apartment because they had been hoping to find Ana there. Yet, what they found was an arsenal. Luka and possibly Ana had collected weapons at his apartment and so the police had every reason to believe that the two could be planning a terrorist attack. So they wanted to know where they were planning an attack and who else might be involved though Luka’s brother didn’t want to be forthcoming. Luka’s brother Armin had claimed that the police were wrong about Luka and so he hadn’t wanted to help them find the other man.

But Detective Carisi had tried calling Luka from Armin’s phone and he would have been able to trace the suspected terrorist if Armin hadn’t spoken up to warn his brother that it was a trap. Armin had been so sure that he was right about Luka that he didn’t want the police speaking to either him or his brother without a lawyer present. So Armin had tried to do his best to keep his brother away from the police yet facial recognition ended up picking up both Luka and Ana heading into Central Park. And that made the police believe that the attack was going to be at the park.

The police had headed to Central Park with a major task force at their backs and they had hoped to catch the couple before the two could open fire. Though sadly Luka had ended up running into an off-duty cop in the park that made him move up his timeline and so he had already opened fire when the task force found him and Ana. So the police had opened fire on Luka and had brought him down however, Ana had turned herself in without a fight although there had been a reason for that because Ana had later claimed to have been a victim of Luka’s.

Ana and her lawyer had told Barba in open court that she had been a victim. Their story was that Ana had been seduced and then beaten into submission by Luka and his brother Armin. So they were saying that she had been in fear for her life when she had ultimately been forced to go along with their terrorist plot. However, Barba didn’t believe any of it and thought that Ana was only claiming that’s what happened because she didn’t want to face life without parole in prison. And so Barba hadn’t wanted Olivia to investigate Ana’s story because he hadn’t want to add any credence to Ana’s story.

But Olivia had ignored what they said and had testified at Ana’s next hearing that she did find evidence that leads her and the police to believed that Ana had been raped, tortured, and more or less imprisoned by both brothers. So Olivia had caught a lot of flak for that. Barba had said that no one was ever going to allow Ana to walk after what she played a part in and Dodds had just lost it all together. Dodds had accused Olivia of sabotaging their case and, in the heat of the argument, he had also accused her of killing his son.

So Olivia had allowed Dodds to get that off his chest because she knew that his son had been his actually problem with her. Though it technically hadn’t mattered what she told the judge on Ana’s case because the judge had decided not to allow any of evidence connected to the rape so really everything was in Barba’s favor. Barba had a terror suspect on trial and the judge had suppressed the only thing that could get her off.

And so Olivia had used that to get Ana to take a deal. Olivia had convinced Ana and her lawyer that they needed to take a deal because Armin for fighting for custody of Ali. So Ana agreed in order for her rape case to have more credibility. Yet, that too hadn’t mattered in the end because Armin was eventually arrested for espionage and planning another terrorist attack. And so he ended up getting arrested and taken to a place he may never leave, but that also meant that Ali would be safe and that’s all Ana wanted.

While Olivia just wanted to be happy for once and she thinks she finally has the chance of that with her son and fiancée.