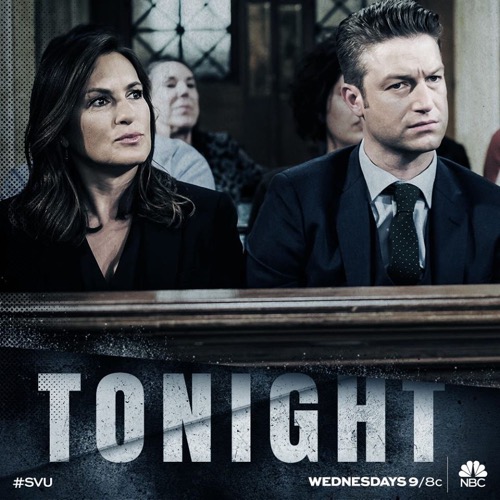 Did you watch the season 18 episode 3 Law & Order where a man (Langham) tore a family apart when he used a prominent fake identity to lure a vulnerable wife and mother into his bed? If you missed it we have a full and detailed Law & Order SVU recap, right here.

On tonight’s Law & Order Season 18 episode 2 as per the NBC synopsis, “An athlete is the victim of sexual assault, but her secret double life could ruin both the case against her attacker and her Olympic future. Meanwhile, Rollins (Kelli Giddish) reconnects with her sister Kim (guest star Lindsay Pulsipher) after she’s released from prison on parole.”

Tonight’s episode of Law & Order SVU kicks off with Amanda Rollins at her sister Kim’s parole hearing. Kim swears to the pole board that she is a changed woman and has found religion. They seem to think she is being sincere and grant her parole. She has to either move in with Rollins or stay in a woman’s shelter in the city.

Rollins heads to work and fills Olivia in on what happened at the parole meeting. Olivia thinks that Kim moving in is a horrible idea and advises against it. Rollins seems to think that her sister has really changed though. Olivia warns her that if her sister gets in to trouble and Amanda covers for her again, this time she will lose her badge.

NYPD picks up an erratic housewife named Jenna running the streets of Manhattan – she has bite marks on her thighs and her breasts. Olivia and Rollins are called to the hospital to investigate. Jenna is acting a bit off, and says that she doesn’t remember anything, she cries to her husband that someone raped her. Jenna swears she doesn’t remember anything about the guy, just that he said his name was Phil and they met at a hotel bar.

Fin and Carisi head to the hotel to ask questions – they learn that the man she left with was named Michael Wheeler. They track down Michael, he says that he had sex with Jenna, but it was consensual, and apparently Jenna was a prostitute and he paid her $500.

Olivia and Rollins visit Jenna at home, she admits that sometimes she went to the city and worked as an escort because she “got a thrill out of it.” Jenna insists that she didn’t even take Michael/Phil’s money because he was being too rough and she asked him to stop and he wouldn’t. So, she ran out of the room. Jenna begs Olivia and Rollins not to let this go public. Apparently, she’s headed to the Olympics as a pole-vaulter, and if this story hits the tabloid, she will lose everything.

Back at the police station, Olivia and her team are arguing over whether or not Jenna was technically raped. Rollins’ sister Kim stops by, she is excited to tell her about looking for a job and maybe going back to school. Rollins is a little rude to her, and tells her sister she can’t show up at her job like this.

Fin and Carisi hit the streets – they find a dozen other prostitutes who say that Michael raped them too. He pays for sex, then he is abusive, puts some of them in the hospital. Olivia wants to move forward with a case, but Jenna doesn’t want to testify and go public. So, Jenna agrees to wear a wire and meet up with Michael and try to get him to admit on tape what he did.
The meeting is going well, and Jenna is getting Michael talking at a bar. Then, her husband arrives and freaks out. When he realizes that Michael is the man that raped his wife – he blows the whole operation and attacks him. Olivia and her team have to rush in and take matters in to their own hands.

Olivia is still determined to make the case stick. They pull Jenna’s phone records and find out that she called her agent the night of the rape. Fin and Carisi try to get Jenna’s agent to testify on her behalf, instead he drops her as a client. Without an agent, Jenna’s trip to the Olympics is falling apart – she finally agrees to take the stand and testify against Michael Wheeler.

Jenna heads to court – and it’s not going well. It’s pretty hard to prove rape, if you are working as an escort. Jenna takes the stand and describes in detail how Michael Wheeler forced her to have anal sex with her, and laughed at her when she asked him to stop. The jury seems to be pretty moved by Jenna’s testimony – until Michael’s lawyer points out that this is all a publicity stunt, Jenna becomes unraveled on the stand and starts shouting at the lawyer and stripping off her clothes to show him how perfect her body is and why Michael wanted to rape her.

That night, Rollins and Carisi track down Jenna. She’s with her husband training at a track. And, she’s out of control, she’s clearly in the midst of some sort of manic breakdown. They convince her to see a doctor and Jenna is officially diagnosed with Bi-Polar Disorder. Once Jenna is medicated, the judge agrees to give her another shot on the witness stand. At the last minute, Michael Wheeler agrees to take a plea deal for assault.

After the case is close – Rollins heads home, she’s shocked to see that her sister Kim is home alone with her daughter, the babysitter had an emergency and left. Rollins catches her sister taking pills in the bathroom and accuses her of being on drugs. Kim confesses that they were prescribed to her and when she was in prison she found out that she has Bipolar disorder.