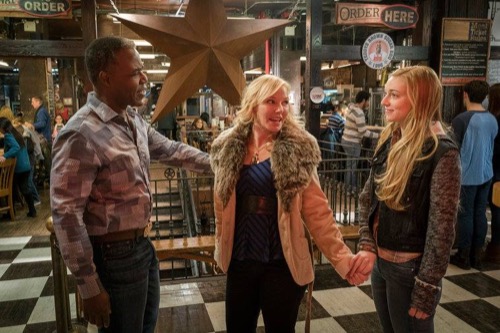 On the last episode, Chicago P.D. detectives Lindsay (guest star Sophia Bush) and Dawson (guest star Jon Seda) joined the SVU in the hunt for two escaped murderers (returning guest stars Dallas Roberts and Jefferson Mays) they helped to convict. Did you watch the last episode? If you missed it, we have a full and detailed recap right here for you.

On tonight’s episode as per the NBC synopsis “an undercover sting leads to the takedown of an online pedophile ring and the arrest of two high-profile suspects.”

Tonight’s season 17 episode 15 looks like it is going to be great and you won’t want to miss it, so be sure to tune in for our live coverage of NBC’s Law & Order: SVU at 9:00 PM EST! While you wait for our recap hit the comments and let us know how excited you are about the new season?

Tonight’s episode of Law & Order SVU kicks off with Rollins undercover – she brings along a young girl straight out of the academy to meet a retired UFC fighter named Teddy Hawkins. Now he owns a bar and sells barbecue sauce – Rollins says that her “neice” is almost 16 years old. Rollins, the other undercover cop and Teddy head in to the basement of the bar.

Teddy offers to take photos of Rollins’ niece for a modeling shoot – he slowly coerces her into getting undressed and letting him take pictures of her. Meanwhile, Rollins is recording the whole thing in her phone. Olivia and Fin are upstairs and waiting for a signal from Rollins. Teddy starts to take his pants off and Rollins pulls her gun on him and shouts that he is under arrested for attempted rape. Olivia and Fin rush in and cuff Teddy, of course he insists that he is innocent and he “knows his rights.”

At the precinct Teddy argues that Rollins is guilty of entrapment, when he realizes how serious the trouble is that he is in – Teddy announces that he wants to make a deal with Barba and he is willing to give up an entire online pedophile ring. Deputy Commissioner Frank Abraham stops by and congratulates Olivia and her team on the bust, he gives them a pat on the back and says that Hawkins is “a big get.”

Meanwhile, Dodds is at the gym completing his physical therapy (he was shot) and his dad pays him a visit. His dad got a call from the Terrorism Task Force – they are looking to recruit Dodds since he “took a bullet” and he’s a hero. Dodds argues that he just got to SVU and he doesn’t want to leave – his laugh scoffs that SVu is small fish compared to his next gig.

Olivia sends Pippa and the kids to a hotel so that NYPD can search their house – Tucker and Olivia oversee the search to make sure that everything is done by the book. In Frank’s bedroom they find flash-drives tapes underneath his dresser drawer. Tucker tells the men on duty to bag it and tag it and follow the proper chain of command perfectly – this investigation can’t have any mistakes since they are going after one of their own.

The next day Pippa shows up at the police station with the kids to be interviewed. She shouts at Olivia that this is all ridiculous – she says that it could have been the housekeeper or that her husband could have been framed. Meanwhile, Frank is insisting that he is innocent, Tucker tells him that they found the flash drive taped to his dresser drawer and the jig is up.

Rollins and Carisi sit down with Pippa’s kids to interview them – both kids insist that their dad has never touched them inappropriately. Olivia is satisfied, she tells Pippa that she can take the kids home. Pippa wants to know what is going on with her husband – Olivia tells her she can’t give up any information.

Barba meets with Frank and his lawyer at his house a few days later. He runs in to Pippa outside – she is taking the kids and moving in with her mom in Pennsylvania. Frank and his lawyer want Barba to “put the charges on hold” because he is sick and he is seeking sex addiction rehab. Barba tells Frank that he can’t turn his back on these charges, the feds are involved now because he is a police official. There aren’t any deals that Frank can make – Barba tells him to save his family the embarrassment, plead guilty, and just do his time. Frank kicks Barba and his lawyer out of his house.

Olivia meets up with Pippa to see how she is doing – and she isn’t doing well. Her kids are a mess, and she is embarrassed that she had no idea what her husband was doing on the computer. It’s her job to protect children, and she didn’t even know her husband was a pedophile.

Olivia and Barba are sitting at the precinct and waiting for Frank to decide whether or not he is going to plead guilty – if not they have to give the case to the feds. While they are waiting they receive phone call – the Deputy Commissioner just attempted to commit suicide by slitting his wrists. Olivia rushes to the hospital and Pippa is there. She stopped by the apartment to pick up the kids’ clothes and found Frank and called 911 – she saved him just in time.

Meanwhile, Teddy Hawkins is skating by with just a misdemeanor for offering an underage kid a drink. He even opened up a $1Million charity to fight child pornography.

When Frank is released from the hospital, he heads to court and pleads guilty for child pornography. Frank is headed to prison in protective custody, when his sentence is over he will be on the sex offender registry for a minimum of 20 years.